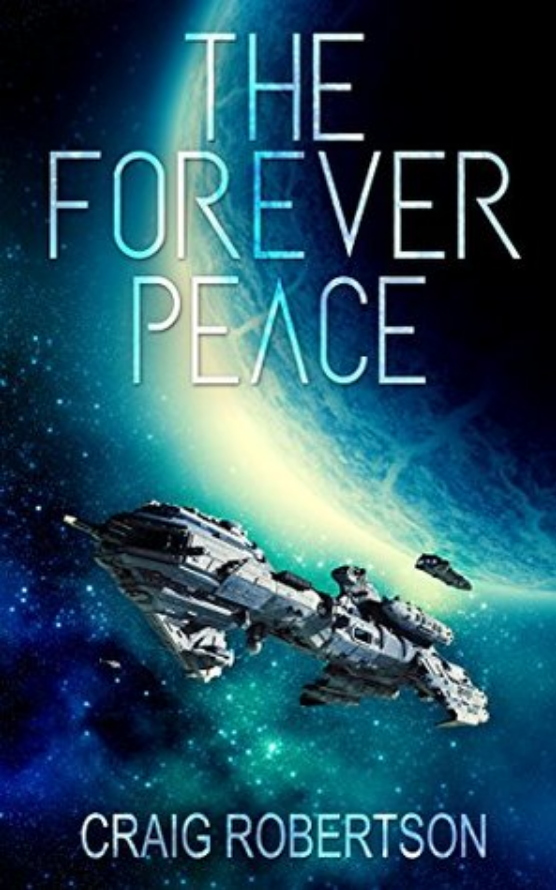 Jon Ryan faces yet another enemy bent on galaxy-wide conquest. The Berrillians threaten humanity and the galaxy, and Ryan once again is called in defense.

The Forever Peace by Craig Robertson continues to deliver more of the same story pattern as previous iterations in the series. The entire Forever series feels at times like history repeating itself with Jon Ryan at front stage performing and regaling audiences with his humor and wit.

Whether it’s fighting against warrior fish, other human clones, or felines, the pattern holds that Ryan will eventually succeed, but not until he overcomes some seemingly insurmountable obstacle that threatens himself, his family, or all of humanity.

But even if the stories follow a fairly predictable pattern, the characters, primarily Jon Ryan, are still enjoyable. Ryan’s humor may be a distraction to the supposedly deathly threats, but by the sixth book in the series, I imagine readers will come to expect flippant responses from the protagonist.

It’s this threat to the galaxy that the Berrillians, a feline species, pose in The Forever Peace. But instead of going against the antagonists alone in this story, Ryan forms a coalition of allies to face the threat. After all, other aliens stand to lose something as well. This aspect of the story is my favorite: the meeting of aliens and the gathering of allies to withstand a greater foe.

I can’t help but wonder sometimes if the universe that is The Forever isn’t just a figment of Jon Ryan’s imagination. It’s as though the universe is just the backdrop for Ryan’s ego and performance. His personality and humor are reflected from the aliens he meets, almost as though those aliens are aspects of Ryan’s ego. Thus, the alien encounters feel a bit too contrived at points. For instance, Ryan’s encounter with Zalt and the snidely named Jerquod is representative of the interactions Ryan has with other aliens.

So it’s difficult to take any sense of threat or doom to the galaxy very seriously. Ryan, armed with a super powerful ship, can’t lose. Power aside, the ship provides Ryan with the ability to explore the galaxy. It’s this exploration and meetings with new aliens that give The Forever Peace and the series a sense of discovery and wonder that makes science fiction stories fun and imaginative.

The Forever Peace by Craig Robertson concludes the adventures of Jon Ryan in a satisfying manner. Fans of the series will find nothing particularly surprising with Ryan and his actions, but they’ll nevertheless get an enjoyable story from Jon Ryan, regardless of the enemies he faces.

Read other reviews for books written by Craig Robertson.