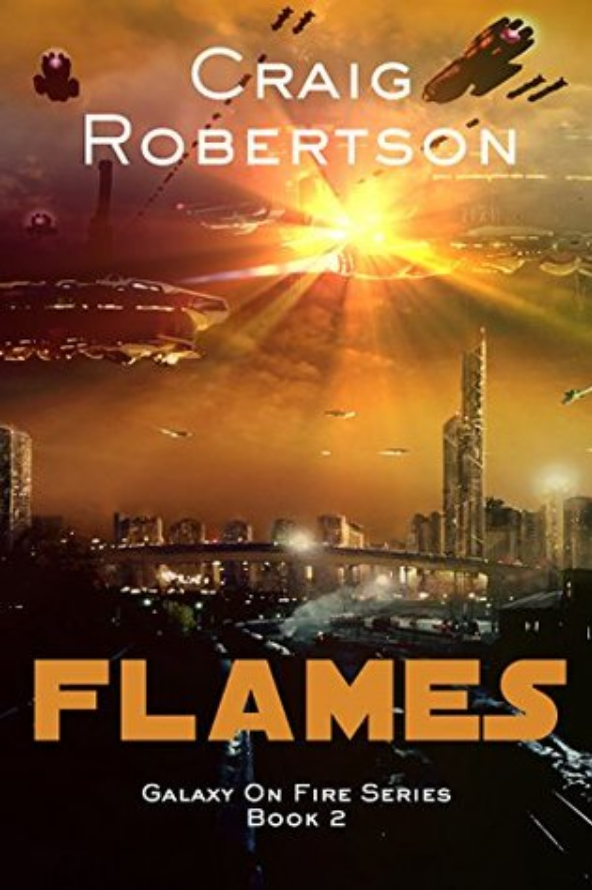 Jon Ryan overcomes some obstacles, meets some old friends, and faces down the Adamant in order to save his two companions, Mirraya and Slapgren.

Flames by Craig Robertson continues the same engaging and humorous story that began in the previous book, Embers. Jon Ryan’s escapades and humor continue to propel this lighthearted, sometimes serious, story forward, though the conversations between the captured Adamant and AI can sometimes drag on a bit.

Jon Ryan tries to free his two captured friends, Mirraya and Slapgren. Ryan runs into some old friends from The Forever series, and he has to overcome those obstacles in order to save his friends from the Adamant.

The characters from the previous books return: Jon Ryan, Mirraya, Slapgren, and a few other favorites from the original series.

The story takes place across the galaxy.

Fans of Craig Robertson’s writing style will continue to enjoy Flames, the sequel to Embers in the Galaxy on Fire series. The engaging story and fun writing style, delivered through Ryan’s dialogue and banter among the characters, manages to make the story lighthearted. It’s difficult to take the whole situation seriously when Ryan is able to escape deadly situations through humor and luck.

But if you’ve read any of the previous books, you’ll know what you’re getting yourself into. The plot is interesting, and having Galaxy on Fire take place two billion years into the future allows the writer to imagine a new story that ditches the baggage that was humanity.

What I particularly enjoyed about this book are the revelations about the Adamant and their culture. While I’m a bit sad it took the capture of both companions, I’m happy that the author took the opportunity to reveal some more details about the Adamant, who they are, and perhaps provide us with clues about where they come from.

One of the reasons I enjoy science fiction is that this particular genre explores possibilities. That’s why Robertson’s decision to stage Ryan in the far, far future is so great: this allows Ryan to detach himself from all those domestic squabbles that were preventing him from exploring and getting himself into trouble. And that was becoming evident with the type of enemies humanity was facing in The Forever series.

Going into the story, I was almost certain Ryan would get his vortex manipulator. After all, a doctor without a Tardis, like Ryan without a vortex manipulator, is severely handicapped. But having an all-powerful machine at your side all the time makes for a fairly boring story. The writer manages to deal with this particular issue in Flames in a fairly clever manner.

Some familiar characters will make their return in this book, and one of them will introduce a wrench into Ryan’s plans, along with setting up the possibility for a more epic clash later in the series.

One aspect of the writing that could have been improved upon by editing out is the prisoner. The dialogue, sometimes monologue, was initially interesting, though as the story progressed, I felt myself wanting more and more to skip these chapters. I didn’t for fear of missing out on some bits of information, but these sections could have been edited down for more brevity.

There’s almost no way any reader who enjoyed Embers could skip Flames by Craig Robertson. This story introduces more complexity into the Galaxy on Fire universe, and these details further enrich the universe. I’m certainly going to continue with the series in the hopes of discovering what happened to humanity.

Read these other reviews on books by Craig Robertson: