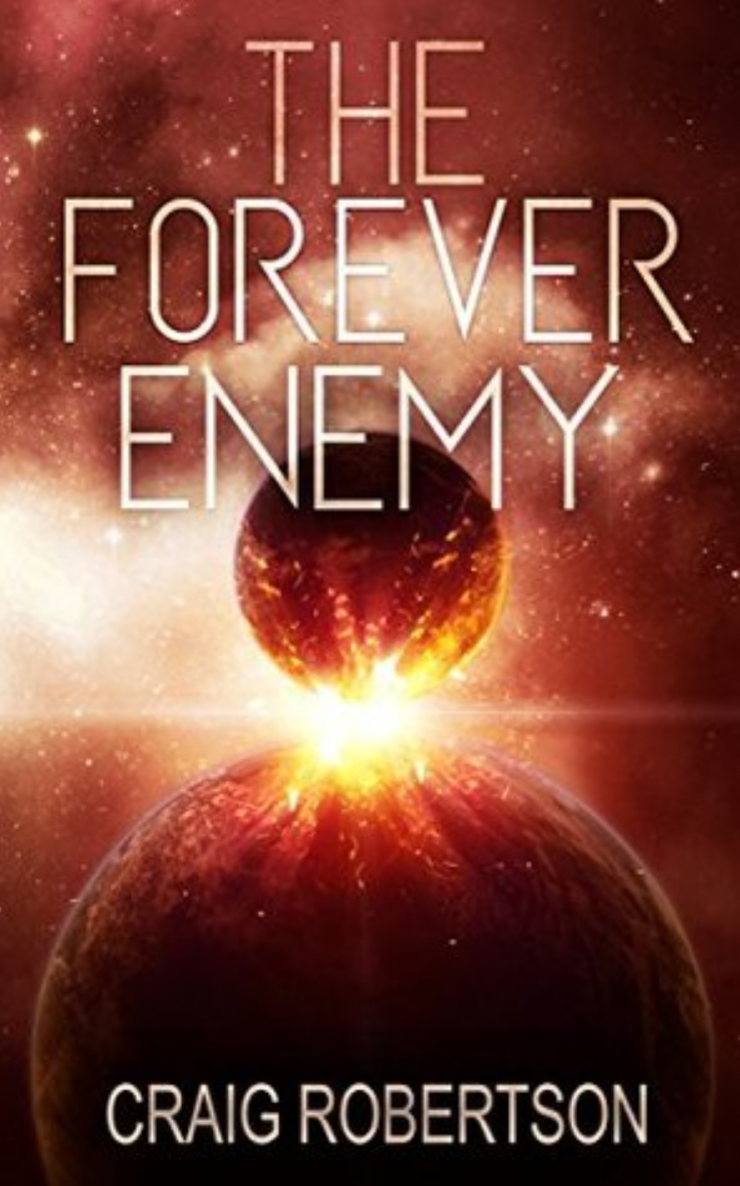 Stuart Marshall, the US President who now inhabits an android body, wants Jon Ryan dead. And Marshall is willing to sacrifice his own citizens to achieve his revenge against Ryan. Meanwhile, Jon, Sapale, Toño, and his ship start a new colony on the planet to prepare for humanity’s arrival.

The Forever Enemy is a fun continuation of The Forever series by Craig Robertson. Readers may be turned off by the villain, Stuart Marshall, but the story promises some more exciting events after the Marshall arc.

As the survivors of Earth slowly move toward their new home, they face a new internal threat: the president of the United States, Stuart Marshall. Marshall seeks revenge against Jon Ryan, and all of the world ship

Ryan and his crew grow with DeJesus and Toño joins on the new ship. More children are born, and the family grows. Stuart Marshall and his allies seek revenge against Ryan, and their conflict ensnares the rest of the world ships.

The story takes place on the world ships and humanity’s new home, as well as the scout ship for travel between stars.

Fans of the first book may be a little disappointed in this second one, but that’s not because the writing style or characters have gotten worse. The first book delivered a story with a galaxy of exploration, aliens, and technology. There was a sense of wonder at what Ryan would discover as a result of his immortality.

Instead, the sequel to the The Forever Life is a little disappointing because the major conflict occurs among humans. In a galaxy of seemingly limitless enemies, the surviving humans have to face one of their own.

That said, Robertson does an excellent job at making readers hate Marshall. Marshall’s vindictiveness, personality, goal of creating a giant harem of women (including young girls) is despicable. And Marshall’s allies are just as bad. Marshall transfers his chief of staff’s consciousness into the body of Marilyn Monroe as a form of punishment.

Maybe it’s Marshall’s perversion that leaves me with a feeling of distaste. I’m not opposed to evil villains, but having an antagonist like Marshall in a science fiction story just doesn’t work for me. I’m accustomed to having alien enemies—they have a simple goal of subjugation or elimination.

The whole conflict between Marshall and his allies against Ryan and the rest of humanity seems like it’s some kind of interlude before some greater conflict. The humans are on their way to a new home, and Ryan is only just beginning to start his family and colony on the new world. So I imagine the vastness of space means that enemies are more likely to be from within than from without.

I suppose once the conflict is resolved and humans finally get to their new home, the story may open up to something more, possibly involving the aliens introduced in the first book. I look forward to the end of this story arc with Marshall and the beginning of something new and exciting, something that includes exploration, technology, and aliens.

I did enjoy the dynamics between Ryan, Al, and Sapale. The humor and friendly banter makes the story relatable and gives the sense of intimacy among the characters. That Ryan now has a family and a world to build makes me feel like there’s light at the end of the tunnel that is Marshall. Having Toño join the crew adds an element of maturity that balances out the crew quite well.

If the conflict with Marshall can be resolved, I think the story would have a lot more potential. I enjoyed The Forever Enemy, but it was a bit of a disappointment compared to The Forever Life because of Marshall.

Those who love science fiction love that the genre provides an outlet, and while Marshall isn’t necessarily a bad character, he’s just too tiring. And he introduces an unnecessary obstacle to the exploration and alien aspect of science fiction. Perhaps that’s what makes Marshall such an unlikable villain.

The story in the first book is fun, exciting, and filled with wonder. I only hope that subsequent books return to inspiring and evoking those same feelings.

Read my review on other books in The Forever series.