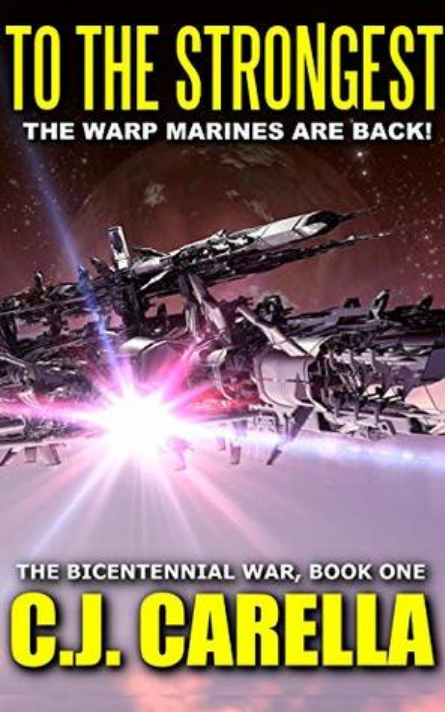 Earth faces a hostile universe that is plotting its destruction. But they have to get past a new unit of Warp Marines with abilities that and technology that will give Earth a chance of survival.

To the Strongest Review

To the Strongest by C. J. Carella delivers a fun, action-packed military science fiction story for fans of small unit special operations. Readers will find many parallels between the history of the United States, and the world, and the hostile universe that Carella imagines for his first book in the new series The Bicentennial War.

While I haven’t read Carella’s other works–namely, Warp Marines–I found that the lack of understanding for the context of the universe didn’t affect my enjoyment of the book too much. Yes, a richer context would lend to more enjoyable reading, and many fans of the series would likely agree with that sentiment.

One aspect of the story relies on a small group of people who, save for their unique supernatural abilities, would pass into obscurity. But because of their abilities, they become part of a new Wraith Marine Regiment that conducts special operations using technology reliant on supernatural powers. In this sense, the story has a quality of fantasy, almost magic, that surrounds these powers.

The Wraith Marine Regiment conducts missions to protect humans against a universe that is extremely hostile to humans. Their pursuit of those who conspire against humans leads to a deepening mystery that promises a larger showdown that involves grave harm to humanity.

The other threat to humanity happens outside of the shadows. Threatening human colonies and space is an enormous and technologically secretive group of violent aliens simply known as the Horde. History buffs may find the Horde and its rampage across space similar to the Mongol expansion. Even their clan groupings are reminiscent of the Mongol tribes.

It’s this immediate threat of the Horde on the human colonies and the growing threat of the aliens conspiring toward humanity’s extinction that is exciting for readers.

To the Strongest by C. J. Carella is an action-packed military science fiction novel that delivers an exciting start to a new series in the Warp Marines universe. While the decision to keep the names similar between reality and fiction may lead to a sense of patriotism, and thus imply eventual victory, it’s the journey that matters. And readers will find that journey fun.

Read reviews of other great military science fiction books below.

2019 Book 1 C. J. Carella The Bicentennial War To the Strongest