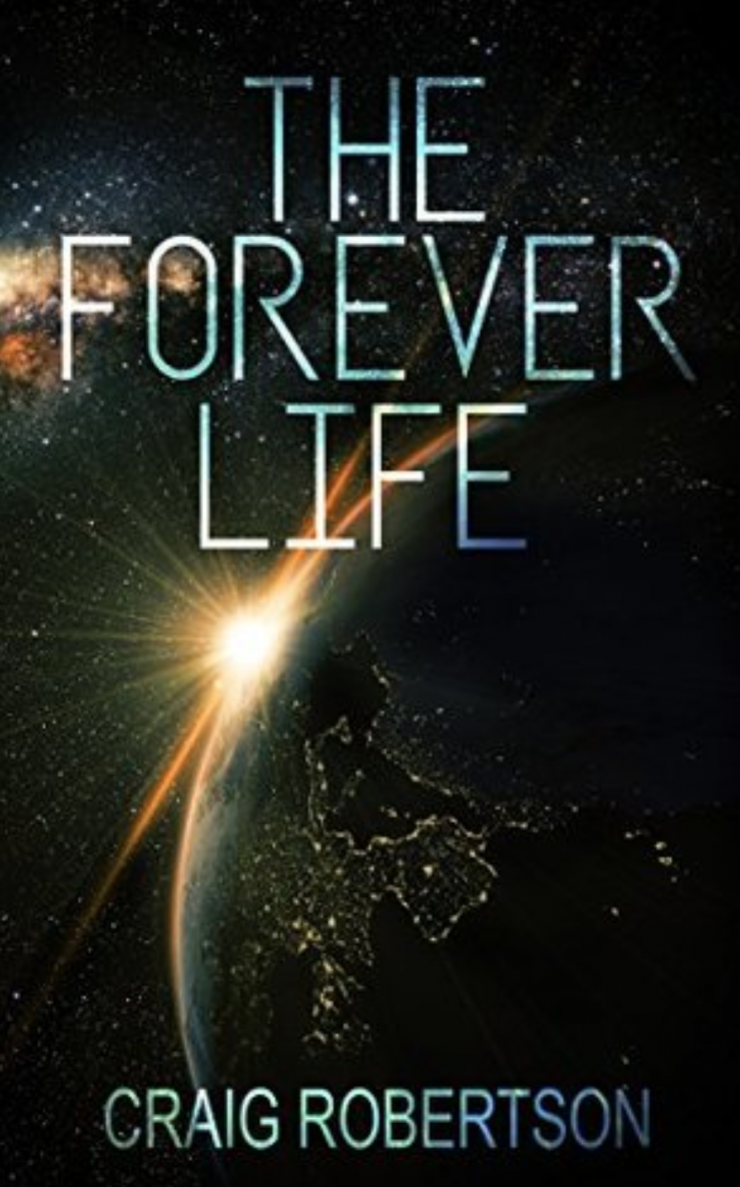 Earth is going to be destroyed by Jupiter in a century. Major Jon Ryan has his consciousness transferred into an android body so that he can explore the galaxy for potentially habitable planets.

I really enjoyed Craig Robertson’s The Forever Life. The writing style and humor is reminiscent of another favorite writer, John Scalzi and his Old Man’s War series. So if you’re a fan of Scalzi, I think you’d enjoy Robertson’s series as well.

The Earth is doomed. The people of Earth only have one hundreds before Jupiter destroys the planet. Governments launch Project Ark in an attempt to save the human race.

To find out where the survivors will go, Major Jon Ryan’s consciousness is transferred into an android. Major Ryan has to scout potential habitable worlds for humanity’s new home. The roundtrip journey will take decades, and his only companion is his ship’s artificial intelligence, Al.

The protagonist is the android Major Jon Ryan. His ship companion is Al, the artificial intelligence. Other characters include Sapale, his spouse or brood’s-mate, and DeJesus, the doctor.

The story takes place in space, aboard the ship, the various asteroids that make up Project Ark, and different planets that Jon Ryan explores.

The story starts of predictably enough once the plot was established: Earth is going to be destroyed by Jupiter and humanity needs a new home.

Since humans can’t really survive a long journey to a new star system, Major Jon Ryan’s consciousness is transferred over to an android. And Ryan’s mission is to look for a new home for humanity.

What makes this story interesting is the sense of exploration and wonder that comes from traveling and exploring new worlds and new stars. The different aliens, technologies, and consequences of meeting new aliens are interesting.

We’re right there with Ryan as he’s exploring planets and testing characteristics of the planets for habitability. An example of this exploration and discussion is Ryan’s exploration of the planets at Barnard’s Star. His exploration reveals that alien life exists, suggesting that the universe may be more populated than humans initially believed.

The writing style is very casual and humorous. Ryan comes across as a jokester, and this really helps with the ease and flow of the writing. But his humor, while mostly enjoyable, can undermine the severity of the situation.

More fun is the banter between Al and Ryan. The ship’s artificial intelligence is a supporting character that serves as a comic relief for the story. Al becomes more endearing as we see more of the banter. More characters join the crew, and the new crew members are fun and interesting.

Some science fiction stories have a bunch of aliens. Others don’t have enough. The Forever Life has just the right number of aliens so that readers aren’t overwhelmed by the different cultures. Robertson introduces aliens one at a time, and readers become familiar with these aliens before new ones arrive on the scene.

Ryan’s discovery adds some interesting technology and practically opens up the entire universe to him. The possibilities that the technology opens up means that the rest of the series can go in any direction since Ryan isn’t limited to conventional means of travel.

The Forever Life, the first book of The Forever series, sets the stage for a fun and exciting story about survival and exploration. Ryan’s humor and casual narration make for a fun and easy read, and the plot is engaging and interesting.

Read a review of other books in The Forever series: