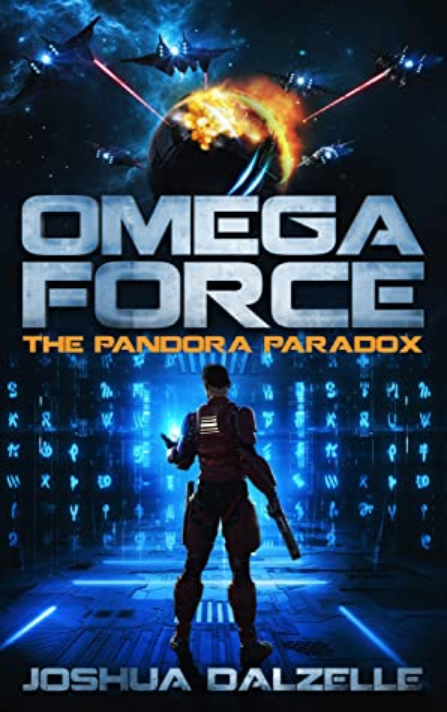 Jason Burke and his Omega Force mercenary crew face their greatest threat: an ancient artificial intelligence with the knowledge of advanced technology and secrets that is determined to control the galaxy.

The Pandora Paradox by Joshua Dalzelle delivers yet another action-packed, fun adventure story starring the misfits who make up the mercenary group Omega Force. Fans of the series know what to expect, and those expectations are largely met, with a few new story arcs introduced in this twelfth book of the series that provides direction for upcoming sequels.

Jason Burke and his Omega Force face perhaps the most serious and dangerous adversary, and this adversary isn’t even alive. Worse, it’s a super advanced and ancient artificial intelligence simply called the Machine. While details about its background are vague—I hope that this is covered in more detail later—what little information readers, and Omega Force, learn about their enemy is tantalizing.

I admit that I enjoy stories with ancient precursor races. Some of my favorite episodes in Star Trek are ones that deal with just this subject. The one that comes to mind is The Chase, where the crew of the Enterprise hunt down fragments of DNA seeded throughout the galaxy by an unbelievably ancient precursor species.

While the details on the Machine are light, Dalzelle does provide a nugget of information regarding the Machine’s motivations, and this information will make readers all the more eager for the subsequent books in the Omega Force series. The hints of a possible crossover with the spinoff series Terran Scout Fleet starring Jason Burke’s son, Jacob Brown, aren’t really exciting considering a mix of the two independent series could result in a merger of the stories. In a sense, The Pandora Paradox feels almost like a transitional story that establishes the stage for the upcoming, and hopefully epic, showdown between man (and biological aliens) and machine.

As usual, Dalzelle’s writing style propels the story with a flowing writing style and action that keeps readers engaged and the story moving forward at a fairly fast pace even if the conclusion of the story leaves much to be desired, resulting in an anticlimactic somewhat-of-a-conclusion that can leave readers feeling a bit cheated.

Another aspect of the story that could use some improvement is the dynamic within Omega Force. The cast of characters and their constant bickering feel a little worn out at this point in the series. The bickering among the crew gives the group dynamic the feeling of an old married couple constantly arguing over the same issue that always results in the same conclusion: Burke tells everyone to shut up. The addition of some characters adds a refreshing element to the Omega Force group dynamic.

The Pandora Paradox by Joshua Dalzelle sets the stage for an exciting and epic battle in upcoming books. Dalzelle’s choice of title provides readers with a huge hint: once Pandora opens the box, earth, and by extension the galaxy, will face evils the likes of which no one has seen since the time of the ancients. It shouldn’t be a surprise when Jason opens that box. What remains to be seen is that evils are unleashed upon an unsuspecting galaxy.

Read reviews of other books by Joshua Dalzelle.