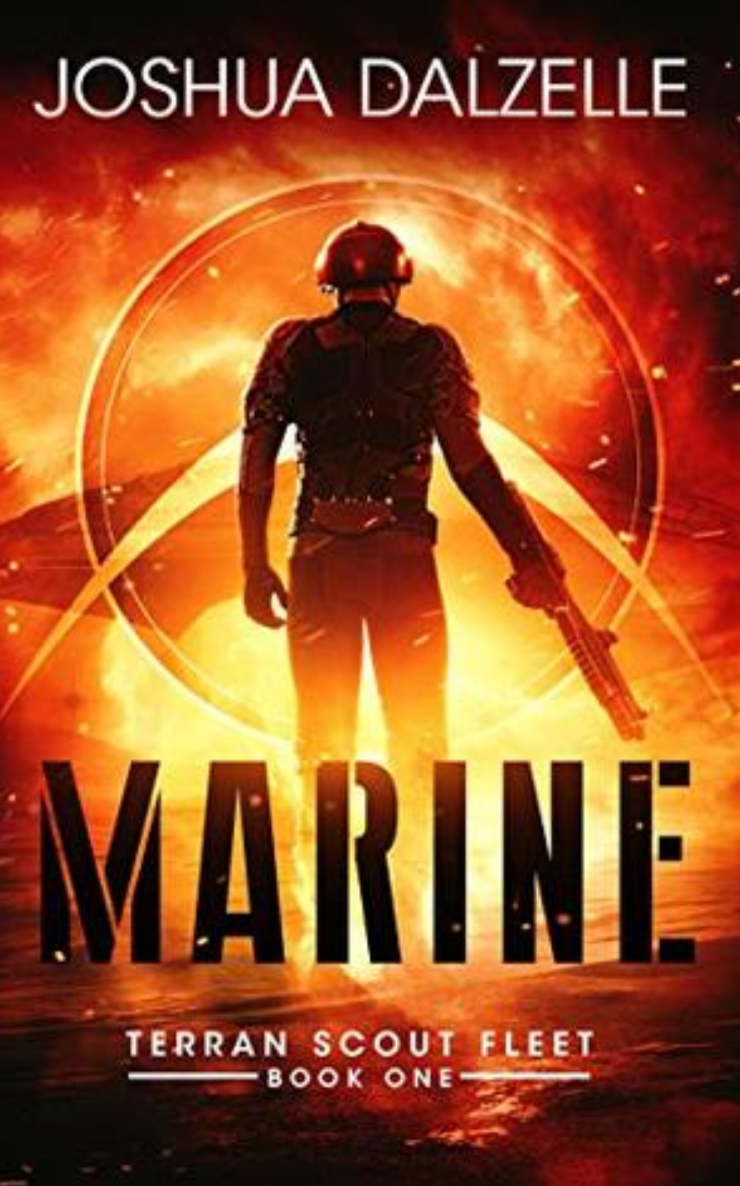 Jacob Brown is pushed into the service as a marine lieutenant under Naval Special Operation Command, where he’s thrown into a dangerous first mission.

Fans of Joshua Dalzelle’s Omega Force series will also enjoy Marine because it provides an Earth perspective into the Omega Force universe.

If you’ve wondered how Earth fared throughout Dalzelle’s other books, then the Terran Scout Fleet series will provide you with more information about how Earth is handling its sudden exposure to the galaxy.

Better yet, it’s immediately clear what Jacob Brown’s relationship to Omega Force is, so there’s a not only a familial link, but almost a familiarity about Jacob’s behavior and actions.

Jacob Brown is a fresh academy graduate who is pressured into service as a marine lieutenant in Naval Special Operations Command. He wants instead to serve aboard and eventually captain a navy capital ship.

He is second-in-command of Obsidian, a scout fleet unit tasked to provide reconnaissance for the fledgling Earth space fleet.

Jacob’s first mission quickly spirals out of control and he ends up way over his head when the simple collect mission ends up involving powerful players in the galaxy even he wasn’t aware of.

Jacob has to prove his leadership ability to his teammates and succeed in his mission in order to return to Earth and get that assignment he so desperately wants.

Jacob Brown, the protagonist, is a lieutenant in team Obsidian. His commander, Lieutenant Commander Ezra Mosler, leads the team.

Team Obsidian goes through space often ignored by the larger powers because of its remote location and criminal elements.

There’s a lot to like about Marine if you’re looking for more of what’s in Omega Force. It’s more of the same style of writing, action, and overall sense of fun that you find in Dalzelle’s other series set in the same universe. There’s never a dull moment when it comes to Jacob’s mission.

There’s a growing sense of Earth’s rise to a respectable power in this book, and I’m happy to see that. Watching Earth be helpless during the two invasions in the Omega Force series wasn’t very pleasant, even if the stories were about Omega Force and not Earth.

What this book and this series (hopefully) do is fill a gaping hole in the current events on Earth. We don’t see so much the political or global consequences of the failed alien invasions, but we do see that the planet has put together an international space navy.

Captain Webb’s comments at the end of Marine imply that Earth will be a major military force to deal with in the future, so Dazelle has kept the option of large-scale naval battles open for future books. That’s an idea that I’d like to see, as we don’t get much in terms of major space battles in Omega Force.

As I read the story, I couldn’t help but think that the apple doesn’t fall far from the tree when it comes to Jacob Brown. In fact, the leadership makes numerous references throughout the entire story to Brown’s ancestry. Maybe that’s an excuse to keep the style of writing the same. You could replace Brown with Burke, and I’d honestly have trouble saying that there’s a difference.

I enjoyed the book, but having two characters who are similar in personality and traits may lead to some fatigue if the series goes on for many books (as I hope it does). Maybe Brown needs some way of distinguishing himself from his father so readers can more easily separate the two in their minds.

And it’s not just Webb. When the characters commented about intelligence leaks in navy operations, I wasn’t the least bit surprised. Webb says a lot about keeping secrets, but he divulges them without much hesitation.

Some nice references exist throughout the book to remind readers that Jacob isn’t too far from his father. For instance, there’s a suggestion that Jacob is on the same planet as Omega Force when they spot an old ship in the spaceport.

M. G., an Obsidian team member, references Jason’s coffee business at the safe house. These little easter eggs were a fun connection to Omega Force. They kept me wondering if Jacob would run into his father during the mission.

Dalzelle also includes some foreshadowing that suggests future members of team Obsidian may be aliens. There’s some mention about aliens requesting asylum or working with humans, so team Obsidian may just be turn into another Omega Force in the future.

I’m not exactly sure where in the timeline the story takes place, but it seems like in a very short time, Earth managed to gear up its ship construction and personnel training. The short time it takes Earth to manage this feat seems implausible considering it can take weeks to requisition and receive parts for a simple repair job. And from what the book suggests, the new space navy isn’t immune to the bureaucracy that bogs down large organizations.

Still, the tidbits that readers get regarding Earth’s position in the galactic community are interesting, and I look forward to the next books in the series.