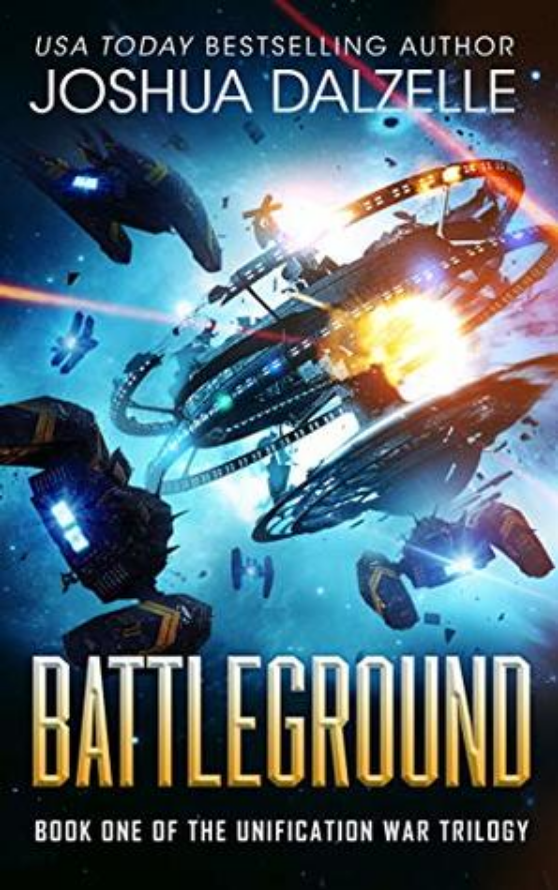 The Eastern Star Alliance is pushing into Federation space and occupying systems. Admiral Jackson Wolfe is sent to negotiate for peace.

Battleground by Joshua Dalzelle continues offering much of the same of what readers have been getting throughout the Black Fleet Saga, with perhaps a bit fewer space battles than previous books in the Expansion Wars.

As such, there’s not much that exceeds readers’ expectations about Battleground, but the plot of the series is both established and advanced in this start of the final trilogy of the saga.

While the story and the tension between the Federation and the Eastern Star Alliance is advanced, there’s not much else that’s going on in this book. Not much information is provided about the aliens introduced in previous books

Instead, Battleground is narrowly focused on one star system with Jackson Wolfe commanding one of the Federation’s powerful battleships against an ESA armada commanded by the antagonist of the story, Admiral Cole. And as with previous books, Wolfe is at a huge disadvantage at the start of the battle.

The story follows the familiar pattern laid out in previous books with long moments of narration and planning followed by intense scenes of action. Dispersed throughout these moments are conspiracies that are commonplace in the series so far.

While the first half of the story is slow, the second half picks up significantly, making the story go by much quicker. Readers with the expectation of fleet action and battles will be satisfied here, but those who want the overall plot progression will be a little disappointed with this first book.

But that doesn’t detract from the excitement that Battleground provides readers. While there may be slow moments and a sometimes too narrow focus on a battle instead of the overall story, the writing is still engaging, and reading the action and counter action feels like a game of chess.

Battleground by Joshua Dalzelle delivers the same intense action and engaging plot as previous books in the Black Fleet Saga. Readers will find familiar story elements here with a cast of favorite characters leading suspenseful battles. All of these elements contribute to a satisfying story, and Wolfe’s self-criticism at the end of the novel isn’t fooling anyone.