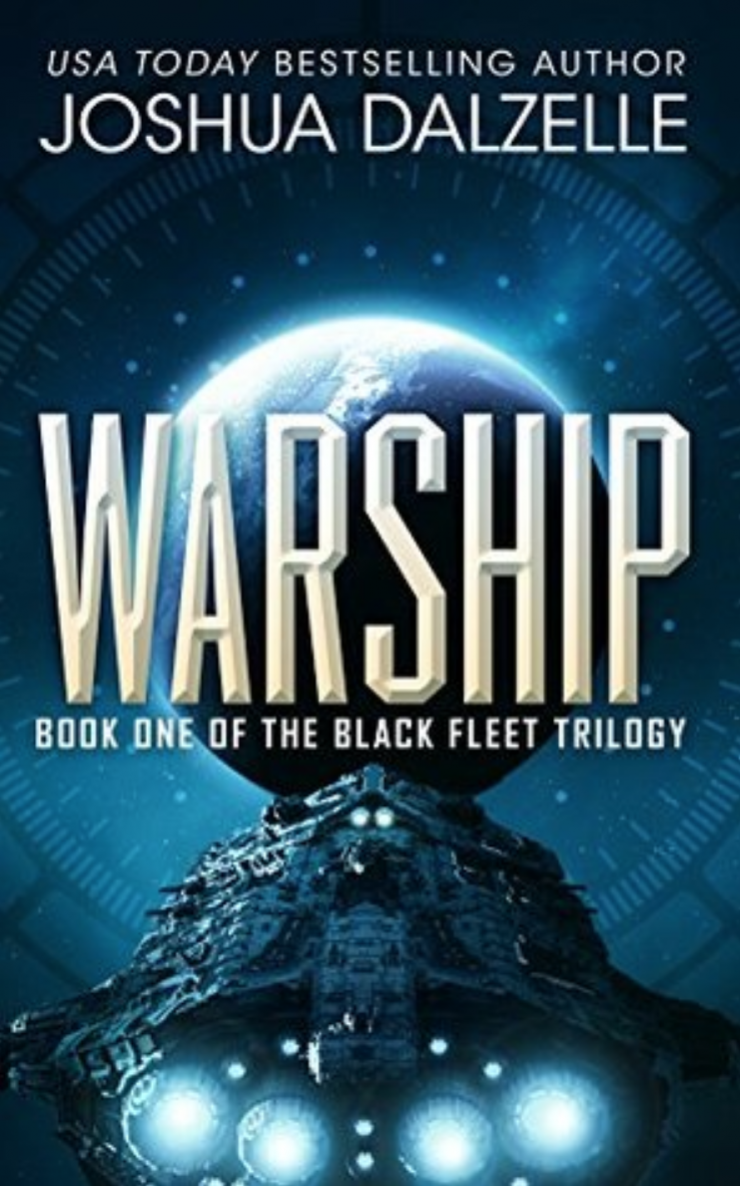 Jackson Wolfe, captain of the aging warship Blue Jacket, finds himself thrust into a battle with an alien entity to save human colonies.

Warship by Joshua Dalzelle delivers a lot of action in such a short book. Wolfe’s command of the aging Blue Jacket allows for fun and tense encounters.

Readers who enjoy military space operas and who are looking for a fun book (and trilogy) won’t regret picking up the Black Fleet trilogy. It’s not as engaging as Dalzelle’s other works, but the writing is fine and the action is engaging.

The Blue Jacket, captained by Jackson Wolfe, is sent on its last mission to ferry a political aide to a colony. When it arrives at the colony, the crew discovers an alien ship above a devastated colony.

Now Wolfe has to defend his crew and other colonies from this fearsome enemy with an old destroyer that has been slated for decommissioning.

Jackson Wolfe is the commander of the aging Blue Jacket, one of the last warships built during an era that has long since passed. Celesta Wright is his second-in-command.

The story takes place in space onboard the Blue Jacket and around various human colonies in space, like Xi’an.

Warship by Joshua Dalzelle takes readers on a fun action-packed ride that includes aliens, space battles, and clever strategy. Everyone loves a story where the underdog wins, no matter how unlikely that victory seems. We see this from stories in the Bible with David and Goliath all the way through to Star Wars, with the destruction of the Death Star.

Warship manages to give readers the same sense of satisfaction of seeing the little guy win through clever strategy and maneuvering. Maybe this sense of rooting for the little guy is ingrained in our genetics. After all, our ancestors weren’t the biggest, strongest, or even the fastest. But they were the smartest, and this allowed them to succeed.

I actually read Expansion Wars before I came across Black Fleet Trilogy. I really enjoyed Expansion Wars, and having read the series in reverse, I noticed just how much the writing and storytelling has developed and matured. Whereas New Frontiers is more direct with its action and more to the point, Warship takes its time with exposition.

Warship sets up the foundation necessary to really understand what’s going on in the universe that Dalzelle is creating in both Black Fleet Trilogy and Expansion Wars. Readers will learn more of Wolfe and how he managed to earn his reputation.

While Wolfe is trying to unravel the mystery of the colonies, readers are taken from one hypothesis to another as to the disappearance and destruction of the different human colonies until the inevitable reveal.

There’s a lot more exposition in Warship that’s missing from Expansion Wars, so readers who want constant action and space battles will be a little disappointed. In fact, the story doesn’t pick up until well into the story. This book, and the trilogy, are worth the time investment if you want to understand the universe behind Expansion Wars.

I recommend these other books by Joshua Dalzelle: