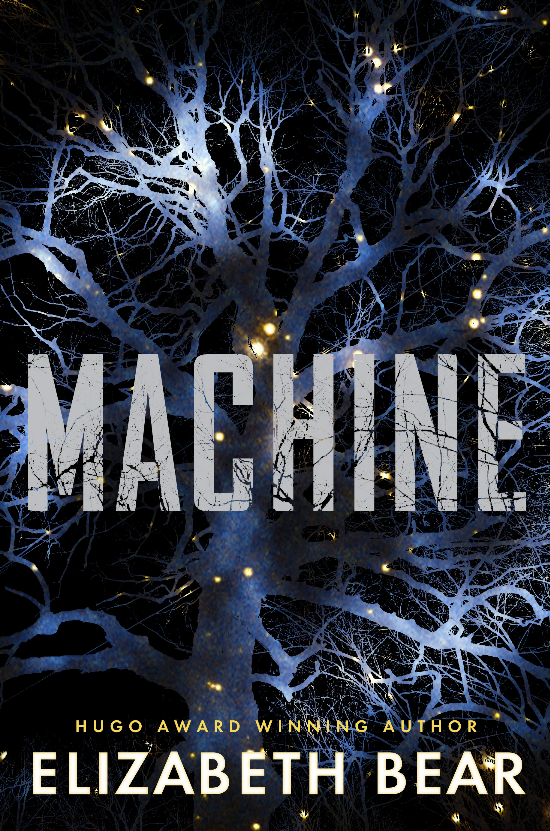 Dr. Jens investigates the mystery of a generation ship and its inhabitants, and her discoveries may shake the core of the Synarche.

Machine by Elizabeth Bear delivers an interesting mystery story set in a science fiction universe filled with a variety of intriguing aliens that give the story universe a quality of being “lived in” rather than feeling “hollow.”

One difficulty that science fiction writers face is that their stories too often focus on the protagonists and supporting characters while paying scant attention to the characters in the background. The result is that it’s difficult to imagine a full universe populated by dynamic aliens for readers care about.

But Elizabeth Bear manages to get readers to care about the supporting aliens in the story. These characters have qualities that make them individuals, and as a result, readers can imagine a universe wherein these characters live with one another and interact in an ever-changing story. It also helps that the setting, a hospital station, contributes to the illusion of alien diversity and pervasiveness with its different habitation quarters.

Fans of Iain M. Banks’ Culture series will find some familiarity in the naming scheme of the ships in Machine. Like the Culture series, the ships in the story have interesting names like I Race to Seek the Living. Having a phrase or sentence as a ship name seems a little odd considering our naming conventions for ships, but this quality contributes to the feeling of “strangeness” in science fiction, as well as the idea of sentience and individuality with ship intelligences.

One axiom of mystery stories that all readers know well is that it’s always the person people least expect. Knowing this doesn’t really diminish a reader’s enjoyment of mystery stories, but it sometimes does dampen the surprise. While Machine is no different from other mystery novels, the reading is still enjoyable, and the variety of aliens contribute to the sense of anticipation and wonder.

If there’s one driving motivation for the protagonist, it’s her desire to defend the Synarche’s egalitarian ideals. In the story, politics provides the driving force for the antagonists’ actions. It’s not too difficult to imagine an ideal future—Star Trek has shown generations one possible future, however imperfect.

The protagonist, Dr. Jens, is fairly bland by comparison to the cast of diverse and descriptive characters. Her complaints about her aches and pains can feel redundant at times even if her medical condition has some relevance to the story.

However, her defense of her ideals both as a doctor and as a citizen of the Synarche is admirable. What little she reveals about the galaxy leaves readers wanting more: the truly democratic system which, on a galactic scale, seems to be working despite the faults of such a system for minority members.

Dr. Jens’ pursuit of the mystery of the infection highlights some faults in a federation of aliens that purports to be egalitarian. Whether these faults can be remedied remains to be seen in the conclusion of the novel, where Dr. Jens’ discussion of “right-minding” the criminals is reminiscent of brainwashing and feels almost repugnant no matter how she defends the process. Her casual support of such a program does little to alleviate the reader’s suspicion about the Synarche. Indeed, if anything, the motivations of the instigators in this story reveal a small crack in the society that, in time, will only spread.

Machine by Elizabeth Bear will entertain readers with an intriguing mystery set in a universe that is alive with a variety of aliens united in the preservation of an egalitarian society that is beginning to show its flaws. The mystery of the infection that Dr. Jens needs to solve may seem a little too close to home during the pandemic. But whereas the resolution of our own pandemic may lead to a return to the status quo, Dr. Jens’ revelations will perhaps lead to some soul-searching for a very busy galaxy.

Read reviews of other similar books.