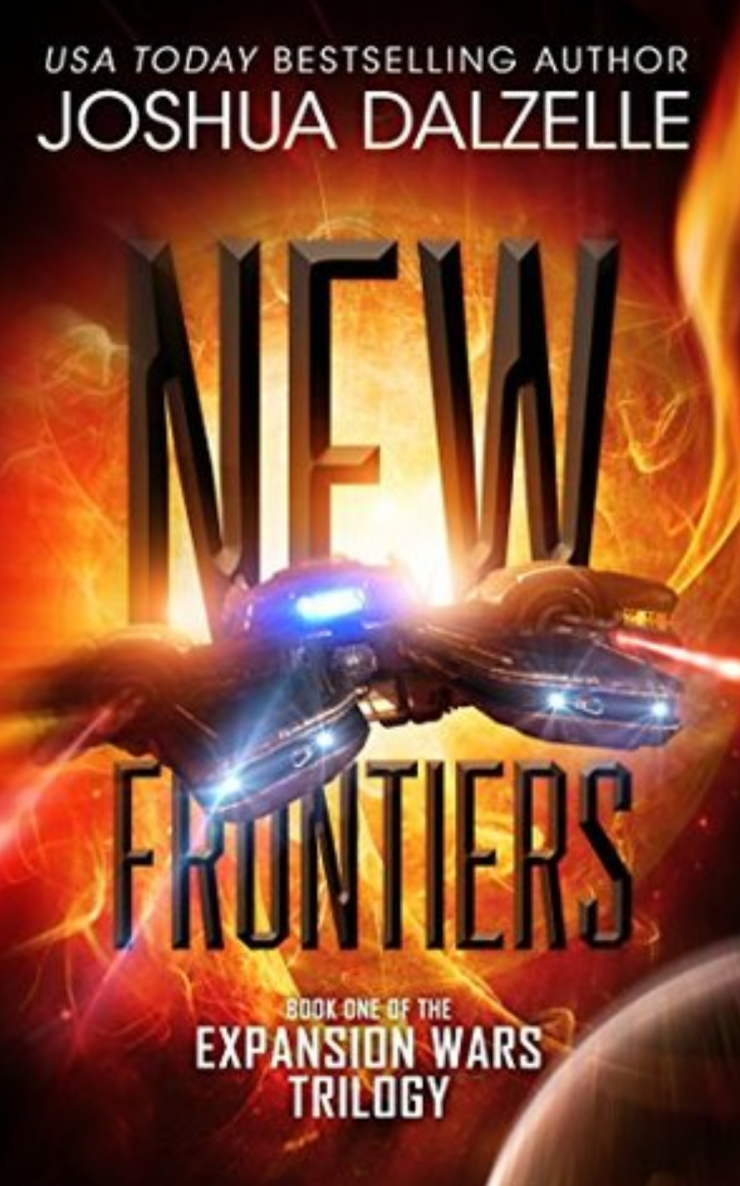 I was a fan of Joshua Dalzelle’s Omega Force series of books, so I didn’t hesitate to start the Expansion Wars trilogy when I came across it. And I’m glad I gave the series a shot, as the writing style is engaging and the story is interesting.

I have a preference for space operas since they often include aliens and other planets. They also tend to avoid the mechanics or logistics of space travel, which can easily get too technical.

If you’ve read Omega Force and enjoyed it, I’m certain you’ll enjoy New Frontiers as well. The writing style is a little more tame than in Omega Force, but the story revolves around the survival of a fledgling United Terran Federation rather than an eclectic group of adventurers.

Expansion Wars takes place in the Black Fleet universe, so you’ll want to read the Black Fleet trilogy as well. You’ll learn more about the exploits of Jackson Wolfe in those books. In fact, you may want to start with that trilogy before you move onto this one.

Humanity has just survived the Phage war when yet another disaster strikes.

Not only is the Confederacy split into two powerful factions, but humans are now facing the prospect of yet another war with an unknown alien species.

But the story revolves around humanity’s encounter with two additional alien races after the Phage War, the Darshik and the Ushin, and their motives with dealing with humans.

The Ushin ask humans for help with the occupying Darshik forces.

Senior Captain Celesta Wright and her ship the Icarus are sent to help the Ushin drive the Darshik out the Ushin system. In return, the Ushin promise humanity the locations of about two dozen human habitable worlds.

Many of the characters in this book come from from the Black Fleet trilogy. New Frontiers centers about Senior Captain Celesta Wright and her ship the Icarus.

Jackson Wolfe is also present as the director of a top secret research project.

The United Terran Federation and its frontier colonies are the settings for this story.

The story revolves around the Icarus and her crew.

Fans of military science fiction can rejoice, for this series has a lot of military maneuvers and action. Most real space battles at long ranges can be boring. Some stories get around the vast distances by making battles up close and personal. I’m thinking about The Expanse television series.

New Frontiers alludes to the fact that space battles involving long distances take too long. But Dalzelle manages to fill the wait between battles with interesting events and a focus on other aspects of space battle.

That’s not a fault of the book, but it’s a good reason why I should have looked into the sequence of books before I started this one.

On its own, New Frontiers is still an engaging story. It has mysterious aliens with unknown motives. It has spaceships and military space battles. And it has good writing.

It doesn’t have the lightheartedness and camaraderie of Omega Force, but New Frontiers has a more serious current through it.

I’m curious about the motivation behind the Ushins’ behavior, and their complete alienness makes anything possible. That’s the beauty of aliens in science fiction. We can’t really understand them through the lens of human experience.

I wish there was more revealed about the Ushin and the Darshik. The little we do learn about the aliens leaves us wanting more.

The story adds on the two alien species as by claiming that they are somehow related, but outside of some hypotheses based on ship designs, there’s not enough evidence to connect the two.

The one drawback to the story is the politics. While it’s not necessarily a criticism of the book, the political aspect of any story always seems to drag on the necessary action that people must take to survive. And sometimes, stories can get too bogged down with the political action rather than moving the plot ahead.

One interesting aspect of the story universe is the idea that human habitable planets are in short supply. This limitation adds an interesting twist to the universe.

Also mysterious is the artificial intelligence in the cube. What is it and where does it come from? These questions and more leave me wanting to read more in the next book.