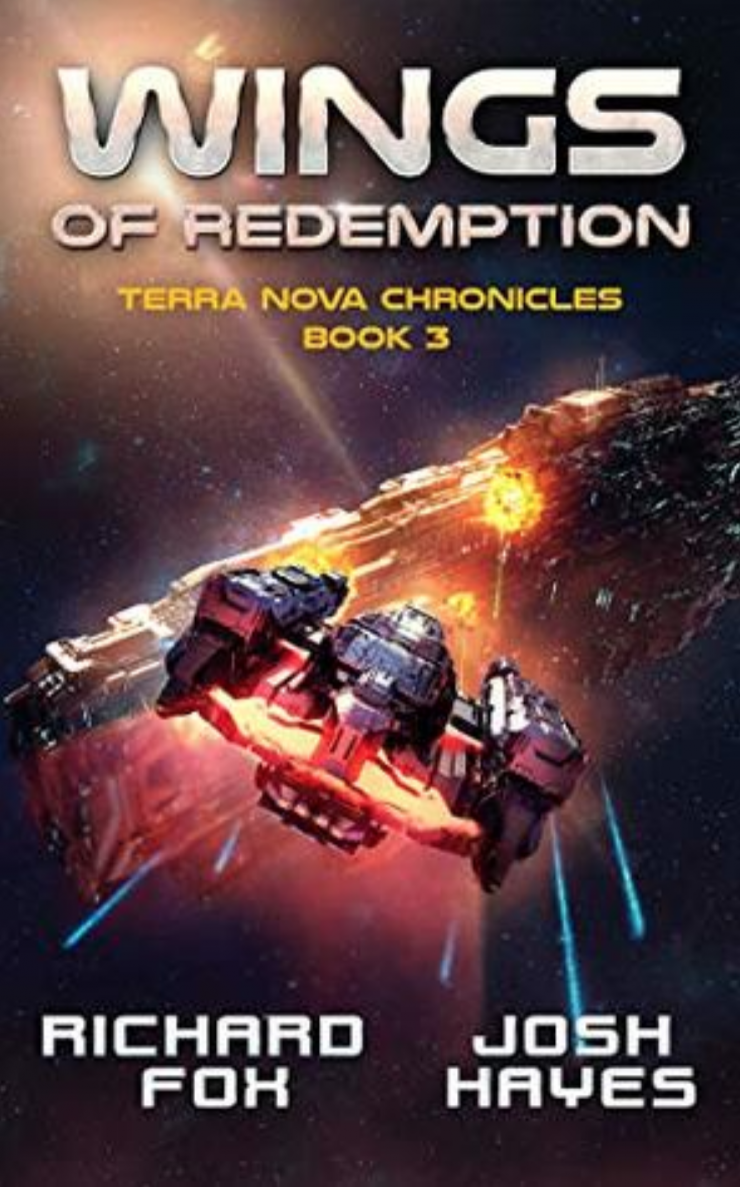 Wings of Redemption provides fans of the Ember War series and its spin-off, The Terra Nova Chronicles, with seemingly nonstop action and battles. This book ticks all the right boxes for fans of fun, military science fiction with a solid plot.

Ken Hale sends his Pathfinders out to find allies to fight the Triumvirate. Meanwhile, someone is killing the doughboys on Terra Nova. The Triumvirate is increasing its strength and taking over planets, using Jared Hale as its Herald.

Kit Carson, leader of a small squad of Pathfinders, is sent to Yalara find allies for Terra Nova against the Triumvirate threat.

MAC is an android from the Ultari homeworld sent to investigate the Triumvirate.

Ken Hale, governor of Terra Nova, attempts to bolster defenses for the colony using whatever means necessary to prepare for the Triumvirate invasion.

The story takes place on Yalara, Terra Nova, and Ultar, all planets in the new galaxy.

Wings of Redemption continues the epic struggles that haunt humanity. And these struggles always seem to be the apocalyptic type. It’s not just a small border skirmish. Instead, trouble comes in the form of some grand galaxy-spanning threat.

I wasn’t too excited about starting over with humanity through Terra Nova since the other books all included allies like the Dotari, one of my favorite alien species in the stories.

Like many of Fox’s works, this story contains a lot of action in a fast pace that carries readers through the story quickly. There’s not much downtime when it comes to this book, or the other works. That can be a downside for readers who want to take the time to think through and enjoy the story.

If I have one complaint about military science fiction, it’s that those stories don’t really promote much critical thinking. Characters are caught in seemingly difficult situations only to be saved at the last moment. These serendipitous moments can be a little overused in some stories. Wings of Redemption certainly has a few of these moments, and I understand the need for writers to include these moments to test and reveal character.

Luckily, the amount of action in the story propels readers forward without giving readers much time to critically consider plot aspects. For instance, I find it difficult to accept Terra Nova’s reluctance to use any means possible to defend itself against the threat of the Triumvirate.

I did find myself becoming more interested in MAC. If anything, Wings of Redemption introduces an interesting element into the Ember War universe that was missing before: androids and artificial intelligence or sentience. Previous storylines used artificial bodies, but these bodies are inhabited by consciousness derived from biological beings. I looked forward more to MAC’s story arc.

By comparison, Ken Hale’s story seemed less urgent despite the threat facing humans. The whole drama on Terra Nova seemed a little too contrived as a result, and I felt that I rushed through those chapters in an effort to get to the better parts.

Fans of Richard Fox will find Wings of Redemption a fun addition to The Terra Nova Chronicles and the Ember War universe. But readers may want to go with the other spin-offs like Terran Strike Marines or Terran Armor Corps that take place in the same galaxy for more excitement. The Terra Nova Chronicles is a true spin-off in that it details the struggles of a group of people who have truly broken away from humanity, and consequently, from the story that is The Ember War Saga.

Read other reviews of books written by Richard Fox.