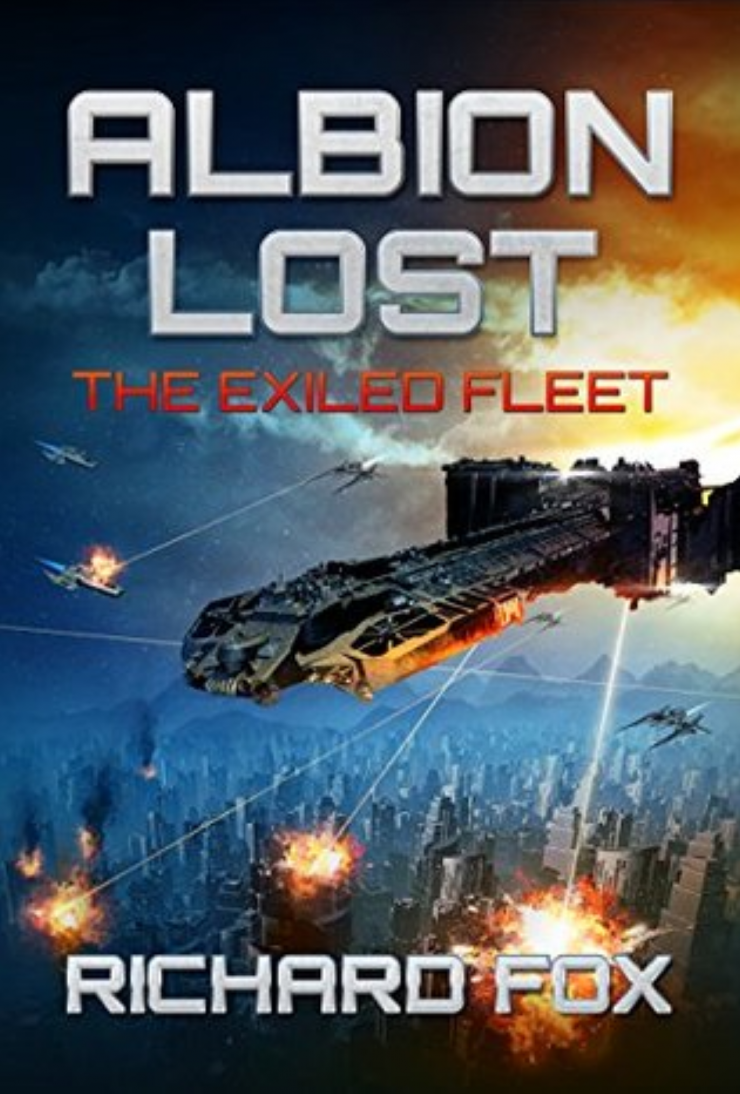 Commodore Gage finds himself in command of the last surviving fleet of the Albion kingdom after a Daegon invasion.

One of my favorite series is the Ember War Saga by Richard Fox, so when I came across this series, I didn’t have to think twice about whether or not to read it.

Albion Lost does start off a little slow in terms of building up to the point, but once the story gets there, the pacing, action, and enjoyment definitely increase.

Commodore Thomas Gage must defend the last surviving prince of Albion, fight off pirate ships, and discover a way to reclaim the kingdom of Albion from the vicious Daegon.

Commodore Thomas Gage is in command of the last surviving fleet of the kingdom of Albion after the Daegon invade.

Other characters include Aidan, the prince of Albion, Gage’s aide, Bertram, and the prince’s two bodyguards.

The planet Albion several star systems serve as the setting for the novel.

The story opens up with a rescue mission involving Commodore Gage against some pirates. Pirates have abducted some citizens, and Gage is in charge of a small team of sailors on a rescue mission.

The writing itself is serviceable, but there’s something lacking. I think part of it is due to a kind of British sensibility or politeness that Albion appears to be modeled after. There’s a sense of Gage and the nobility in the fleet having to act in a dignified and proper way. As a result, there’s almost a subdued quality to the action scenes.

It’s a little difficult to really like Gage. Readers learn about his background and how he differs from the other captains, but he’s still not as relatable or likable as the more dynamic Bertram, the bodyguard Thorvald, or even the shapeshifting spy. Not being a member of the nobility and subject to condescension by other captains isn’t enough to elicit empathy. After all, he’s a ship captain, too.

So many more characters are more interesting than Gage. For example, Bertram and his antics make him a more relatable character. The shapeshifting spy is more intriguing, as he’s not as stiff as Gage.

The writing style may be a result of the Albion culture through which we see the story, or maybe that’s just the style Richard Fox uses for this series. Still, the battle scenes were engaging, and I looked forward to the fight scenes.

One of my criticisms for the book is the feudalistic aspect. It’s not the first time I’ve seen this kind of government in a science fiction story. And I’m still not convinced that such a system would work if it had to encompass several star systems. Maybe a military dictatorship would be more likely, but we don’t know enough about how the Albion government and social structure work.

The bodyguards, their armors, and their duty and contract to protect Aidan is an interesting aspect of the story. If we learned more about their background, I think this information would go a long way toward fleshing out how the system and royalty work. I mean, why does the protection of the royal family need to be contracted out?

The ending of the book is seemingly abrupt. It ends right in the middle of a scene. You’re forced to read the next book in order to get any sense of resolution. I’m opposed to this kind of cliffhanger since it relies so much on remembering events in the previous book. And avid readers are likely to move onto other books before they return to the sequel.

Consequently, the abrupt conclusion of this book may irk some readers. But if you’re reading this review now, then at the very least you can continue on with the second book without interruption or need to review events.

If you enjoy space battles or space wars, then this is a decent book to read, though I wouldn’t necessary rush to pick this up. You may want to wait until the rest of the books become available or start on the Ember War Saga if you haven’t read that yet.

Read reviews on other books in The Exiled Fleet series.