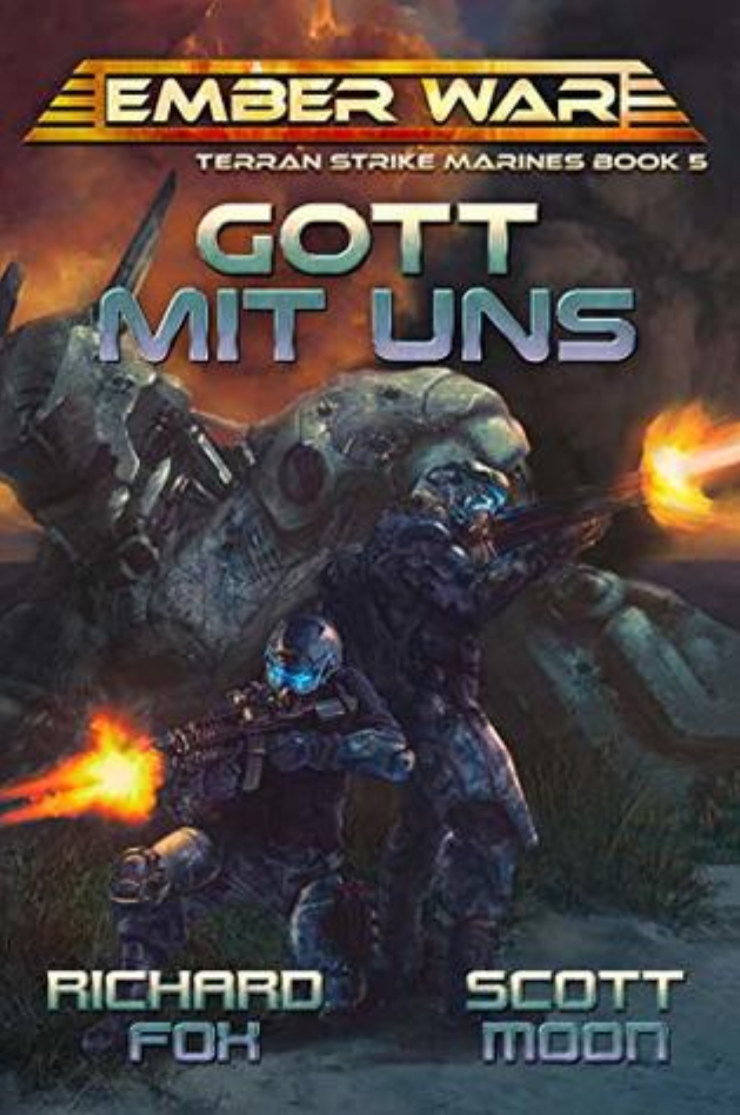 Valdar’s Hammers are sent to the Kesaht homeworld in order to end the war, and immediately after, they’re tasked with rescuing Valdar and the Breitenfeld from the Ibarra Nation.

The Ember War Saga is one of my favorite science fiction series. It’s filled with action, aliens, big baddies, and lots of interesting technologies.

Terran Strike Marines gives readers a look into one aspect of the Ember War Saga universe, and it’s filled with just as much action as the larger story.

Hoffman and his Hammers are dropped onto the Kesaht homeworld to end the war. Afterward, they have to save Valdar and Breitenfeld from the Ibarra Nation.

The team remains the same throughout the series, with Valdar’s Hammer consisting of Hoffman, Booker, Garrison, Max, Duke, King, Opal, and Gor’al. Steuben goes along with the team. Medvedev and Masha also make a token appearance.

The story takes place on the Kesaht homeworld and on the planet Liberty, an social experiment in the Ibarra Nation.

One aspect of the Fox’s work I really enjoy is the integration of different aliens into the human military units. As readers, we’re given a slightly different perspective into the human experience through the eyes of such characters as Steuben and Gor’al.

I know that this perspective is relative—after all, the authors are human (I think), and most writers are able to deliver these insights into human behavior just fine with human characters. But having aliens mix up human figures of speech or slang just provides that bit of authenticity and charm that makes characters like Gor’al or Steuben lovable.

I really appreciated the character development in this book. We get to learn a bit more about Duke and Gor’al, and their friendly-but-not-really banter regarding tobacco provides a nice change of pace from the otherwise intense fighting those Strike Marines constantly face.

I’m not quite sure why Steuben is in this story, though. His purpose, to hunt the Toth, is quickly invalidated, and he’s just along for the ride. The authors made a big deal in the previous story about Steuben. And Steuben’s vendetta against the Toth foretold some serious action.

Speaking of token characters, Masha and Medvedev also show up, but they don’t take a prominent role in the story like they did in earlier books like in Rage of Winter. In fact, both Masha and Medvedev, like Steuben, almost seem to be placed there more for appearance than actual relevance.

While I enjoyed the story overall, I felt like there was almost a compromise in this book. The first half of the book promised some action, and it delivered that action in the form of the Kesaht invasion to end the war.

But the second part of the book removed the guns-blazing, life-threatening action that normally accompanies Hoffman and his team. Yes, they were on an Ibarran Nation planet, but the danger just didn’t seem as intense or as immediate. Maybe being on a planet with technology analogous to today gave me a sense of safety that wouldn’t otherwise be there.

Even though Medvedev and Masha show up on the planet, they didn’t pose nearly the same amount of threat they did in Rage of Winter. And the pair’s brief encounter with Hoffman and his team, while exciting, didn’t quite give off the same sense of imminent doom. In fact, Steuben easily dispatched Medvedev, who in earlier books was able to fight and survive a hand-to-hand encounter with Opal.

The book almost feels like a filler, an in-between episode that works to establish the foundation for a greater story involving the ark. Loose ends like the Toth, Steuben, and even Valdar and the Breitenfeld seem to be brought to a conclusion in order to prepare for the final act.

If you’re a fan of the Embar War Saga and you’ve read Terran Strike Marines, then Gott Mit Uns is a must-read. Some of the changes that take place with the squad are important, and there’s still the issue with the previous teammate Adams that needs resolution. I imagine the next book in the series will be just as exciting, if not more so, and I look forward to it.

Read a review of other works by Richard Fox.