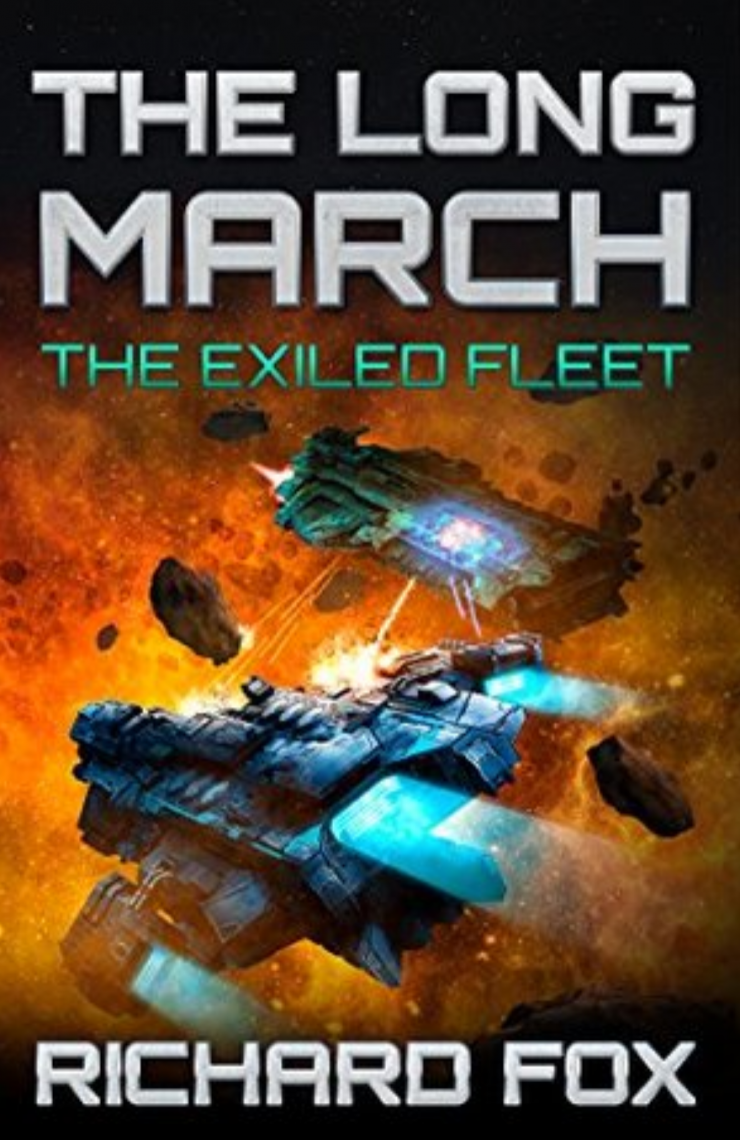 The Long March (The Exiled Fleet Book 2) by Richard Fox

Commodore Gage has to seek the help of his archnemesis pirate captain Loussan in order to navigate the Kigeli Nebula and escape to friendly space.

The Long March is an improvement over its predecessor Albion Lost. The story in this second book of the series becomes a lot more interesting and packed with more action.

The new pirate character, Loussan, and the cat-and-mouse game between Gage’s fleet and the Daegon, as well as a bit more insight into how the Daegon operate make the story universe come alive.

Commodore Gage has to navigate the remaining Albion fleet through the dangerous Kigeli Nebula in order to escape the Daegon commander who is hunting them.

The cast of characters remains the same from the previous book, with a new pirate captain Loussan commanding the Carlin included in the mix.

The Albion fleet has to go through frontier space and across the Kigeli Nebula.

My opinion of this book is much higher than the previous one. There are several improvements simply because the story has a few story arcs that focus on characters other than Gage.

The pirate captain Loussan is a far more dynamic and interesting character than Gage. Loussan’s motivations are pretty clear, and his sense of humor gives life to an otherwise dull Gage. There are a few tense scenes where readers can just imagine Loussan breaking the agreement with Gage, making the engagement with the Daegon and the Carlin that much more tense.

Loussan’s humor and self-serving interests make him a fun character. For instance, he tells his crew that he has secured them room and board, even though that room is a jail cell and that board is prison food. His ability to twist events and situations to his own benefit makes him someone readers are likely to enjoy.

We also get to enjoy a chess game between the faceless on the ship. Seeing the plan unfold to catch the faceless was satisfying.

The much-needed character development in this book makes readers a lot more invested in the story. Readers learn a little more about Prince Aidan, but he’s comes across as selfish and obnoxious. It’s almost enough to make one wonder why anyone bothers with appeasing the prince when lives are at stake.

The one downside is that Gage isn’t any more likable as a character in this book. He’s still too stiff. It’s almost as though he has to restrained in his behavior, making him difficult to relate to. Meanwhile, the people around him become more alive as we read about their exploits.

What’s also interesting is that we learn a little more about how Daegon hierarchy. The Daegon become less mysterious, but they’re still just as strong and dangerous. We still don’t know for certain just where the Daegon come from and what their motivations are outside of a vague sense of revenge.

There’s a lot of potential for the series. While the Daegon are still human, there’s so much unknown about where they got their technology and why they appear so different from other humans. How can a group of modified humans who live on the fringes become powerful enough to compete against established powers? I hope we learn more later.

There’s enough intrigue in this book to keep readers interested. While the title of the book suggests a story about a retreat, we don’t quite get a sense of a “long” retreat. A good chunk of the action happens onboard the ship and with the resistance on the planet occupied by the Daegon.

The actual reporting of the retreat or navigation through the Kigeli Nebula is sparse. Most of space travel is pretty boring, but calling it a “long” march is a bit of a stretch. Still, if Fox is recalling the historical Long March in Chinese history, then there may be some foreshadowing with Gage and his rise to power.

Read reviews on other books in The Exiled Fleet series.