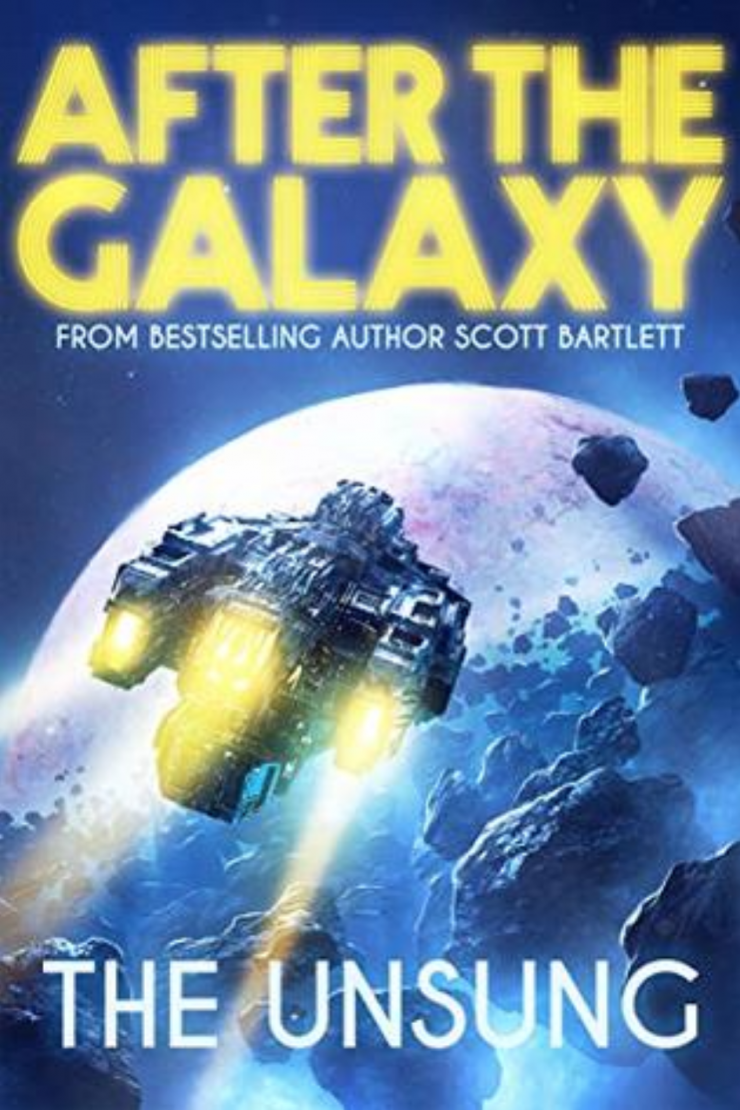 The Unsung (After the Galaxy Book 1) by Scott Bartlett

Commander Joe Pikeman goes to investigate a town on humanity’s home world Earth. When he arrives, he discovers that the residents were attacked and abducted by pirates. Throughout the course of his investigation, Pikeman uncovers a vast conspiracy regarding humanity.

The Unsung by Scott Bartlett delivers an interesting mystery story in a science fiction universe. The protagonist’s unraveling of the secret for humanity is really engaging, but the execution falls a little flat.

If you’re a fan of mysteries, enjoy seeing different technologies in use, and like a lot of ground action, then you’ll like The Unsung.

Commander Joe Pikeman investigates an attack on a town on humanity’s home of Earth. Pikeman learns that pirates are responsible for the attack on the town. Meanwhile, his daughter, Harmony, steals a weapon and a ship to investigate the spate of similar attacks on other towns.

Pikeman is caught up in a vast web of conspiracy that perpetuates throughout the galaxy, and he has to defend himself and his daughter from various antagonists.

Commander Joe Pikeman, a Guardsman, investigates the the death of an Earth colony. His crew is made up of avatars who control various stations, and these avatars are switched our frequently as their terms of service end.

Harmony is Joe Pikeman’s daughter. She also leaves home to hunt down the pirates who are attacking the physical towns.

The story takes Pikeman from planet to planet throughout the galaxy, and there’s a view of the virtual reality universe.

Science fiction readers have likely seen the use of virtual reality worlds, or alternates, in books by Peter F. Hamilton and Iain M. Banks. Scott Bartlett’s use of virtual reality, known as a Subverse in The Unsung, isn’t drastically different from other writers who have implemented these kinds of digital worlds in their stories.

There’s something missing about the universe in After the Galaxy. It doesn’t seem full—missing is the sense of space travel, thriving colonies, or other events that one would imagine in a galaxy filled with intelligence. I suppose Pikeman’s claims that people prefer the virtual worlds more explains part of this emptiness.

One example is FTL technology: readers don’t need to understand the science or mechanism behind it. But when that technology becomes important in the plot, then there should be some attempt at explaining. A good example of this is Star Trek Discovery and the mycelial network. The issues surrounding the Subverses, like economy and infrastructure, aren’t really informative enough to give the story universe context or a sense of depth.

There are a few scenes with Pikeman running into large server rooms that host or manage the virtual worlds. Those large server rooms are akin to today’s data centers, though they seem like an anachronism in a universe where people are able to travel faster than light.

Harmony, Pikeman’s daughter, behaves in ways that are difficult to accept. She manages to steal her father’s gun, hack and steal a spaceship, and ingratiate herself into a pirate family. She wants to solve this big mystery of abductions and attacks. And she’s just a teenager. Not only are her super abilities difficult to accept, but her role in the story doesn’t really seem necessary.

The story itself is written fairly well, and the action is enjoyable. The mystery in The Unsung is engaging. There were several passages that kept me engaged and interested. But the book took me longer to complete than other science fiction books of similar length.

Readers who aren’t too critical of certain plot elements will likely enjoy The Unsung by Scott Bartlett for what it is: a fun, action-packed mystery set in a science fiction universe. Pikeman’s investigation and discovery of the motive behind the attacks is interesting, and the discovery makes the whole investigation worthwhile. As a bonus, the conclusion of the novel sets up what I anticipate to be a broader, and more interesting, story.

2019 After the Galaxy Book 1 Scott Bartlett The Unsung