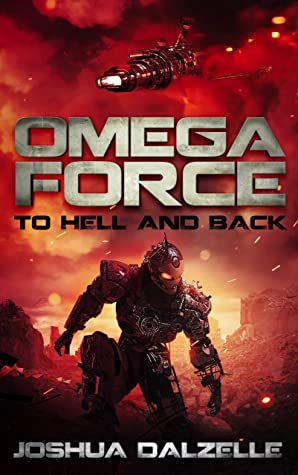 Omega Force attempts to rescue one of its own crew members, Lucky, from itself as it ravages the frontier with its new, deadly body.

To Hell and Back Review

To Hell and Back by Joshua Dalzelle continues with the action-packed adventure of Omega Force as they finally resolve the problem of their errant friend Lucky, who is confined in the prototype assassin model.

There’s a lot going on in this iteration of the Omega Force that may make readers feel a bit lost. The main story with the threat of the Machine and its dominion is still present throughout the story, but the true focus is on Lucky and Seven. That story of Lucky’s plight and its conclusion is filled with action and suspense, characteristics that readers have come to expect now from the series.

However, despite the main plot, there are some introductions of new characters, potential sub-plots, and writing that feels a bit rushed or glossed over. The conclusion and the epilogue are good examples of this feeling of rush and lack of finer editing.

The feeling of abruptness is due, in part, to the passing of time. The jumps between characters or chapters be a little confusing, but even more so is the amount of time that passes between these changeovers. While readers eventually figure out what happens through context, the transitions could have been smoother.

Regardless of these minor faults, fans of the series and of team Omega Force will finally find a conclusion to the Lucky problem that has dismayed readers for several books.

While much is written about Lucky’s torture and suffering, not much of that is relatable or persuasive. At least until readers get a description of the inside of Seven’s ship. The description of Seven’s quarter is a good example of “show, not tell” that distinguishes good writing—it’s simply not enough to say that one person is suffering or conflicted.

The slash marks, burn scars, and punctures in the small area, coupled with the drawings, illustrate the anguish and the internal conflict that haunts Lucky. More of this writing to the other team members in Omega Force would go a long way toward making them more relatable.

As with other books in the series, the conclusion and epilogue of this book offers some tantalizing clues as to the plot of the next book in the Omega Force universe, with a possible conclusion to the threat of the computer and potential unrest in the established order of the galaxy.

To Hell and Back by Joshua Dazelle gives readers a much anticipated conclusion to Lucky’s struggle and story, and the epilogue leaves readers with an expectation about the story arc regarding the Machine coming to a conclusion.

Read reviews of other exciting science fiction books below.

2021 Book 13 Joshua Dalzelle Omega Force To Hell and Back