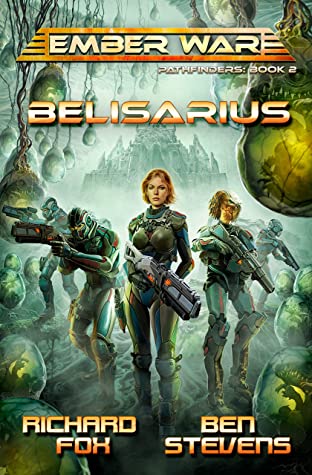 Carson and her team of Pathfinders are tasked with exploring an alien planet and escorting Standish for his new movie when the mission out to be more than they had expected.

Belisarius by Richard Fox and Ben Stevens continues the adventures of Lee and D’hom as they join a new team led by Kit Carson. What made the first book in the series good—action and suspense, alien firefights, impending doom, and sense of discovery—continue in this exciting sequel to Light the Way.

Unlike the previous book, this story is told through a series of flashbacks as Carson recounts the events leading up a trial aimed at dishonorably discharging Carson for the disaster that befalls the mission and the Belisarius.

One of the downsides to stories told using this method is that the suspense of the story, the “will they” or “won’t they” aspect of a scary or tense situation doesn’t have the same impact. That’s because readers knows who made it through the events leading up to the present. That means that no matter what happened during the mission, Carson remains alive to tell the tale.

But readers also learn of a few other characters who are present at the trial, so there’s no real surprise about who makes it and perishes, whereas the Light the Way was surprising in that characters readers had grown to like did not make it through the plot. Consequently, who lives and who dies in this book, with the exception of Carson, remains a suspenseful mystery.

That doesn’t mean that the story isn’t exciting. On the contrary, the mystery lies in how everything fell apart and led up to the present moment in the courtroom. And it’s quite the tell of danger and mystery as the Pathfinders not only have to explore an alien planet with ancient ruins, but they also have to babysit a now-overweight Standish as he tries to recapture the glory of his Strike Marine days in a new fictional movie.

Some of the best parts of the Ember War series are the characters. Standish, Hale, the Armor, as well as D’hom, Carson, and Lee, are all characters readers grow to love. Each of them have their mannerisms and are developed in a way that humanizes them and makes them relatable. For instance, D’hom’s fanaticism for exquisite coffee is a very human trait. So the fates that these beloved characters suffer make the story that much more enticing.

While some characters are loved, others aren’t so great. Captain Roche is so selfish and oblivious that it almost dispels the plot. How can someone so self-interested and oblivious become the captain of a ship? But he does manage to redeem himself, perhaps providing a clue to the man he once was. Of course, the alien villains are just as despicable as any other alien villain intent on destruction.

Belisarius by Richard Fox and Ben Stevens tells another exciting chapter in the story that is the Pathfinders.