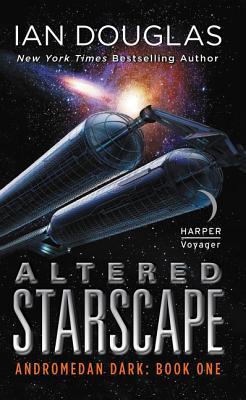 Altered Starscape by Ian Douglas tells an exciting and engaging story about the crew of a colony starship thrown into the far, far future where they must struggle against a being so powerful that it may as well be a god.

The premise of the story may seem familiar to fans of Star Trek Voyager, though the crew of the Tellus Ad Astra are sent far forward in time rather than far away in space. This plot device allows the author to explore some fascinating science concepts like the Dyson sphere. In fact, the discoveries that the crew makes are sometimes more interesting than the actual plot itself.

In this far future, the crew find themselves pitted against an enemy so vast and mysterious that it has managed to consume most of the life in the Milky Way. And what life remains is lethargic as a result of their ascensions. This little detail contradicts what most readers would expect: a rally of galactic proportions against a common foe. That this doesn’t happen makes the ship’s situation that much more dire.

For readers who may be familiar with these fantastic science concepts, the story may feel at times a kind of lecture and history lesson. Still, it’s a nice reminder for some and a great introduction for those new to the concepts.

The story may feel a little slow at the start, and the use of noble titles may seem a bit out of place in science fiction for some readers. Preconceptions about the future in a science fiction universe usually include some sort of democracy or a more egalitarian society—see the Culture series—but many science fiction stories involve imperialistic or hierarchical societies.

But the story offers some background about the history of Earth that attempts to explain or justify the use of such titles as Lord or Lord Commander, though how this social structure fits into the overall plot remains to be seen.

It shouldn’t be a surprise to readers that societies that are hierarchical in structure will have problems regarding rights. The artificial intelligences in Altered Starscape are no different from slaves in the early U. S. history. Though much more intelligent, stronger, and possessing some degree of self-awareness, the AIs in the story are still treated strictly as tools. And it’s not just the androids as readers know them. Other genetically engineered beings, like those that work on the hull of the ship, occupy some transitory state between biology and technology, and they are used as tools as well.

Altered Starscape by Ian Douglas is an engaging story about a galaxy-and-dimensional spanning enemy that seeks to devour all life in the Milky Way. It doesn’t seem like a small ship of one million humans can do much against an enemy that numbers in the billions and has technology that seems godlike. But that makes their struggle all the more interesting.

Read reviews of other similar works below.