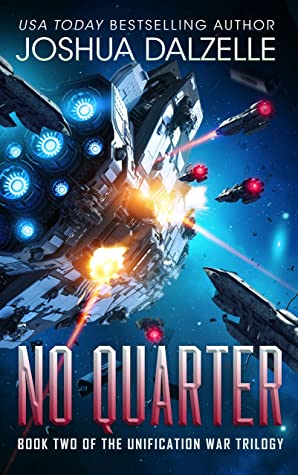 Admiral Jackson Wolfe is tasked with hunting down the war criminal Admiral Kohl of the ESA for devastating a planet. Meanwhile, a secret cabal within the ESA is plots against the Federation.

No Quarter by Joshua Dalzelle is an action-packed sequel that continues the suspenseful conclusion from the first book in the Unification Trilogy series.

The title of both the story and the series becomes a lot more clear at the conclusion of this book, and this reveal is quite an unexpected twist.

Admiral Jackson Wolfe continues his pursuit of the criminal captain responsible for the death of millions of citizens, and the story reveals more about the villains or antagonists behind the war. What results is a game of chess as one side, the Federation, attempts to unravel the many curious moves the ESA and the cabal are making.

As the book nears its ending, something happens that completely upturns expectations and makes the final book in the series eagerly anticipated.

One interesting appearance in the story is the artificial intelligence introduced in the first novel of the series. Though it has no role in the immediate plot, it’s clear that its role will be significant at the conclusion of the series.

But fans of the series and of Dalzelle are likely to forgive these simple errors since the story itself is packed with action and ship battles that often find the Federation fleets at slight to severe disadvantages in terms of numbers, requiring Admiral Wolfe to rely on his superior technology and tactical prowess.

It’s Wolfe’s strategy that makes the story fun to read, and the action scenes keep readers engaged throughout the book.

While the mysterious aliens don’t really show up in this book, they are mentioned enough that perhaps they’ll have a role in the next book.

No Quarter by Joshua Dalzelle is an engaging book that is sure to keep readers interested throughout and eagerly anticipating the final conclusion to an exciting series.

Read reviews of other great space operas below.