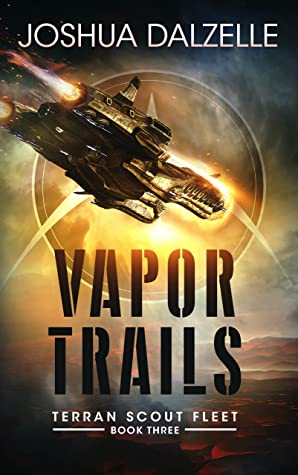 After Jacob Brown steals his father’s ship, the Phoenix, to hunt down the leader of the One World group, it’s only a matter of time before Earth or Jason Burke chase him down.

Vapor Trails by Joshua Dalzelle is sure to surprise and delight fans of the original series as the story marches toward the inevitable meeting between Jacob and Jason that was promised in the previous book.

What’s great about the Terran Scout Fleet series is that the story focuses on Earth and its struggle to find a place in the larger galaxy filled with aliens who are far more technologically advanced. Combine Earth’s attempt to establish itself on the galactic stage with the greed and self-delusion so prevalent among humans, and there’s a formula for a decent story.

Whereas Omega Force focuses on the antics of the mercenary crew-for-hire on the fringes of civilized space, Terran Scout Fleet focuses instead on how humans are elbowing their way onto the galactic stage as a force to be reckoned with rather than some bumpkin species still mired in its own politics.

Jacob and his team continue their pursuit of Jansen and her One World terrorist organization. What they uncover is a conspiracy that reaches deep into the power structures of Earth itself.

For more discerning readers, there’s an unusual parallel between the character (and story) structure of Omega Force and this series. The team makeup is similar in that they have people who occupy the same roles. Jacob’s Obsidian team even has its own battlesynth. There are also personality similarities between the characters in both series that sometimes disrupt the storytelling, especially as the Omega Force characters are more developed and more likely to overshadow the junior team Obsidian.

In some ways, Jacob is like a clone of his father Jason. Similarities abound between the two characters—initials, enhanced strength, personality—so Jacob’s story is almost a proxy for what Jason would have done had he returned to Earth and helped the fledgling planet and species find its way into the galactic community. The merging of the two storylines shouldn’t come as a surprise to readers given the events in the previous book.

The plot itself is engaging, including some elements of mystery that keep readers in suspense as to who the antagonists really are. The reveal is a bit of a surprise, as all reveals are, though in the context of mystery stories, perhaps it may not be for avid mystery novel readers.

The battle scenes and camaraderie among the characters remains engaging and fun, and story progresses along a quick pace so that there’s not much downtime to slow the story.

Vapor Trails by Joshua Dalzelle combines the two separate storylines of Terran Scout Fleet and Omega Force in a seamless manner, allowing characters from both to unite and resolve some tensions. Fans of the series will enjoy learning more about Earth’s place in the galactic community, and the conclusion suggests that the story isn’t over yet.