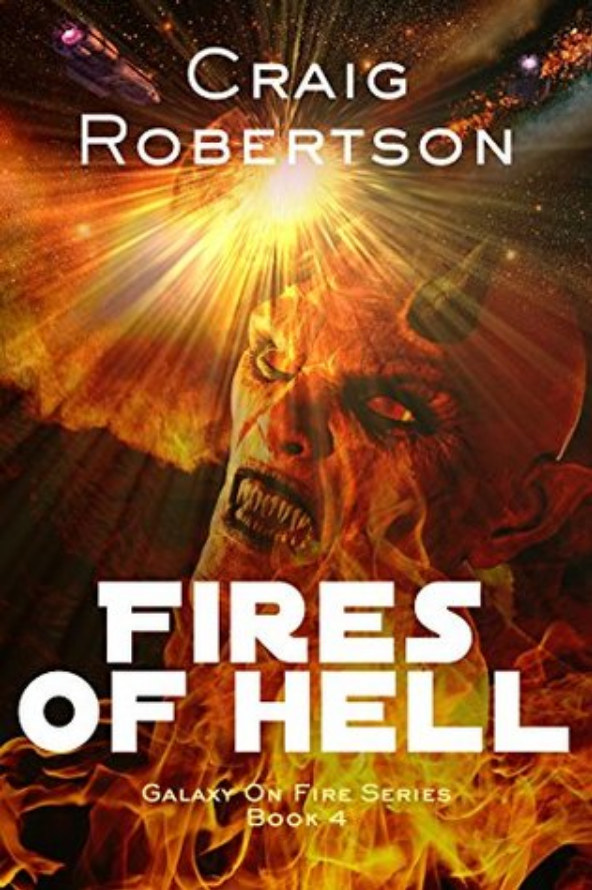 Jon Ryan continues the fight against the indomitable Adamant. Ryan strikes a deal with the devil in order to take down the Adamant, so he must face the consequence.

The Fires of Hell Review

The Fires of Hell by Craig Robertson resumes with a more exciting adventure as the story nears its conclusion, leaving readers eagerly anticipating the conclusion of Jon Ryan’s, and the galaxy’s, struggle against the rampaging Adamant.

There’s a lot more to like about this story in the series than the previous one, Firestorm, which didn’t really progress as much as I would have liked. Additionally, The Fires of Hell returns to that sense of adventure and exploration toward the end that made the The Forever series really exciting.

While there’s always some nemesis that seeks to destroy Ryan or the galaxy, the Adamant seem a lot more threatening, as some of the details in the story suggest. Some of the details regarding their origin seem a little suspicious, but the origins of the Adamant aren’t ever quite revealed, unfortunately.

The second half of the story is far more interesting than the first. Readers know that eventually, Ryan will prevail, as he has against his other enemies. But his encounters, especially with those strange aliens after his little planetary incident, and his deal with the evil force, foreshadow some interesting aspects about the universe that give the series a sense of metaphysics that make the story intriguing beyond just fun action scenes.

Even after the story, I’m left with a curiosity surrounding that strange spirit force and the strange place that Ryan visits. What are their purposes in the story, and what do they portend for Ryan? What do they say about life, the universe, and the struggles of the countless denizens of the galaxy? While I’m not sure that the book will provide an answer to such a weighty question—Ryan doesn’t seem like the type to consider such questions—it’s still a fun idea to consider.

I also quite enjoyed the toned down banter between the Als and Ryan. The severity of their situation tones down the banter enough to be tolerable, while still retaining some of that whimsical quality that makes the story fun.

In earlier reviews, I may have mentioned some similarities to Dr. Who. Instead of a Tardis, there’s a Vortex Manipulator. The only thing Ryan is missing is the ability to travel through time, though that may change with some final battle with EJ. It’s this Dr. Who quality of adventure and exploration that I’ve enjoyed about Jon Ryan’s adventures.

Jon Ryan’s adventure definitely picks up in The Fires of Hell, and it’s a nice change of pace from the previous, slower iteration in the series. Craig Robertson continues to entertain with Jon Ryan and his companions.

Read a review on other books written by Craig Robertson: