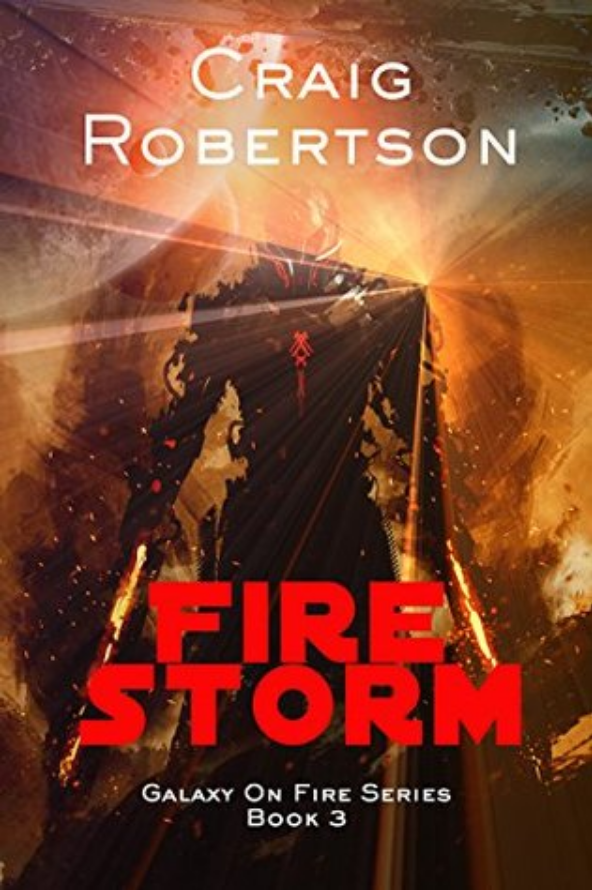 Jon Ryan plots a rescue plan to rescue the two shapeshifters Mirraya and Slapgren from the Malraff and the Adamant. Meanwhile, other parties are interested in Jon’s companions.

I’ve enjoyed Craig Robertson’s Galaxy on Fire series thus far, and Firestorm, like other books, has the same humorous protagonist readers have come to enjoy not only in The Forever, but in the first two books of this series. Not even two billion years has changed Ryan’s humor, nor has it changed how predictably other aliens (and perhaps readers) react to that humor.

While Ryan’s humor and fun-making endeared me to him in The Forever, I found that as his adventures progressed, I was hoping for a bit more severity. Ryan’s antics with the artificial intelligences may be fun, but they don’t seem likely given that the Adamant are so powerful. Still, those scenes with the artificial intelligences, including Al, can be a nice change of pace from the rest of the story.

I’m not certain what significance Al, Blessing, and the Adamant prisoner have in the story. While their scenes make for a fine structural transition between Ryan and Mirraya and Slapgren, I found myself rushing through these sections since their roles, at this point in the story, aren’t really important.

I almost feel as though Firestorm is a bit of a lull in the series because of Al. Overall, there’s not much plot progression, and the story feels a bit truncated as a result. Jon’s encounter at the conclusion of the story leaves a lot to be desired, and there’s just a sense of a missing resolution there given the buildup that readers were led to expect.

There’s a part of me that wants to read more about Sapale. I know it’s my own desire to connect Ryan with his past and provide a sense of stability. But the reader in me knows that this can’t be the case—any tie to the past prevents characters from moving forward. That’s too often why parents in fantasy stories are conspicuously absent. But not all reminders of the past stay in the past, as another antagonist reappears, sort of, to haunt Jon.

The action scenes in the story are fine, and there are some tense moments with the shapeshifters and Malraff. The end of this story leaves readers with a clear sense of who the enemy will be in the next book.

The story is still enjoyable, though readers will want to make sure they have access to the next story in the series so that they’re not left hanging. Firestorm by Craig Robertson is an enjoyable story for those who want more banter in their science fiction stories.

Jon Ryan’s story is one that spans not only space, but time as well, and I know that I’ll continue to enjoy his antics for as long as Robertson continues to deliver.

Read a review on other books written by Craig Robertson: