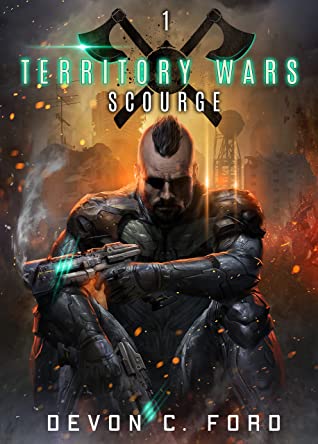 Scourge by Devon C. Ford finds the protagonist and Combined States Marine Corps Corporal Mike Barton investigating the mystery of a distress beacon, missing colonists, and a missing New Russian Confederacy contingent of soldiers who were first to answer the distress call.

One thing that is common across much of science fiction is the behavior and attitude of the lower-ranking soldiers. Mike Barton is no different, often expressing disdain for the officers and using obscene language and jokes.

The frequency of the obscene language, especially at the beginning of the story, takes some getting used to, but the desensitization happens fairly quickly if readers stick to the novel. And they will if they’re to learn what has caused the disappearance of the mining colony and the New Russian Confederacy (NRC) troops who answered the distress call.

Avid science fiction readers won’t be surprised about what has caused the colonists to disappear and later, what is causing the colonists to behave as they do. In fact, the cause for their behavior isn’t that original and feels a little overdone the genre.

Whereas the catalyst that sparks the new conflict between the Combined States and the NRC may be a little overused, the rest of the story, especially as it expands beyond the colony and into the wider galaxy, is interesting and engaging.

In fact, the political alliances in Scourge aren’t quite what readers have become accustomed to seeing in stories. For instance, political and military alliances appear to be based more on geography rather than ideology.

The result is that the New Russian Confederacy consists of European countries, with the two biggest players being Russia and Britain, squaring off against The Combined States, made up of the United States, Canada, and other countries in the western hemisphere.

These unlikely alliances take some getting used to and that they upset “normalized” ideas about alliances give the story a bit of a twist that perhaps forgives the use of the mystery substance.

As with other military science fiction stories, the battle scenes on the ground are great, involving both shoot-outs between various forces and more intense hand-to-hand combat. In fact, the hand-to-hand combat scenes are intense, suspenseful, and quite satisfying as the villains are written well enough to make them unlikable.

Scourge by Devon C. Ford is a action-packed military science fiction novels that adds some unique twists to the more common political alliances that most favors author. The fight scenes, especially the melee fights, are well written and engaging, and the unraveling of the mystery of the colonists reveals only more questions that beg to be answered in the sequels.

Read other reviews of exciting military science fiction books below.