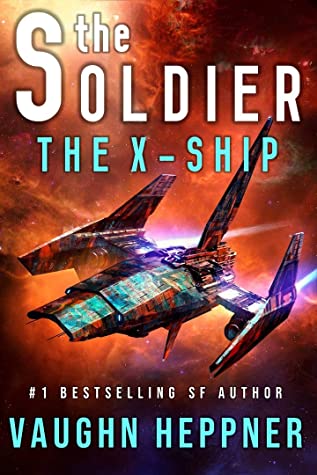 The X-Ship (The Soldier Book 1) by Vaughn Heppner

Against the backdrop of a war that has ravaged humanity, Jack Brune, a super soldier, awakens in the future under the control of a mysterious organization that is determined to use him to uncover secret technology.

The X-Ship by Vaughn Heppner is a military space opera propelled by a mystery that the protagonist, Brune, needs to resolve in order to continue living a life that was interrupted by a mysterious organization headed by a man known simply as the Director.

The mystery surrounding Brune and his background carries the story through even through the slower parts of the story as the context is developed. Brune’s background as a soldier is interesting, and the bits and pieces of it that are revealed throughout the book paint a picture of a historical period that is dynamic and filled with war.

Perhaps the most interesting aspect of The X-Ship is the war between the cyborgs, androids, and humans, though by the time the story takes place, this war and its combatants are history. But that doesn’t stop humans from searching out the ancient and powerful weapons that lie buried throughout the galaxy. It’s this context that drives the story and keeps readers engaged.

Brune’s own quest to recover his memories is fraught with danger and suspicion at every corner. The first person he sees, Doctor Halifax, has suspicious motivations, creating a sense of tension and uncertainty throughout the story. Halifax’s motivations remain fairly unclear since his actions contradict his thoughts, though greed may explain both his actions and his intentions.

Halifax’s inconsistency is further emphasized by his seemingly weak personality. He allows himself to be bullied despite his profession. In fact, Halifax is afraid of almost every character he encounters, making him a difficult character to like.

The X-Ship by Vaughn Heppner starts slowly by introducing the villains at the beginning of the story. But as the story unravels, the universe becomes more and more intriguing and exciting. What happened to the war between the androids, cyborgs, and humans? What technologies in faraway worlds lie buried, awaiting discovery and exploitation? These questions drive readers to look forward to the rest of the series.