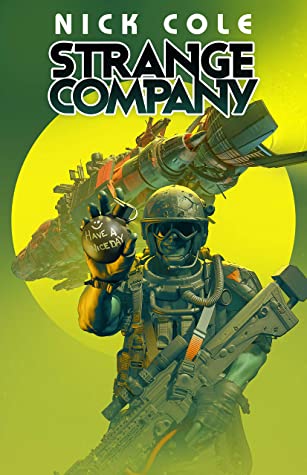 Strange company takes on a mercenary contract and events take a turn for the worse when the Monarchs get involved.

Strange Company by Nick Cook is a great military science fiction story that is filled with lots of firefights with different enemies, explosions, ships, and even voodoo magic. Some of the tactics that Strange Company uses, like the summoning of the magical ultramarine by the little girl, has a feel of fantasy and magic about it that almost borders on magic except that there’s probably some creative science fiction explanation for it in later books.

What makes the book interesting is not only these tactics that would be outlawed today—the use of hallucinogenic and perhaps toxic gas on adversaries—but also the air of mystery and intrigue that surround the Monarchs and their role in the known galaxy.

The story begins in a fairly standard manner: a mercenary group of misfits, Strange Company, is contracted by a fringe colony called Crash to fight for the colony’s right to rule itself. In this way, the story is fairly mundane, perhaps even boring despite the cast of interesting characters with various backgrounds.

Characters like the little girl and her summoning ability, Stinkeye, and even the captain of Strange Company, aren’t really explored despite having some important roles in the story. If these characters were more fleshed out or their roles expanded upon, they would have more depth.

But as the story progresses and readers learn more about Strange Company and its mission, the larger plot in the series that is the series Strange Company is revealed. And this larger plot involves the Monarchs and their lust for cementing their control and power over the galaxy now and far into the future. It’s this Monarch greed and lust that eventually ensnares Strange Company and costs the lives of many of its members. The story then evolves from a fringe colony’s fight for freedom to the larger fight for humanity’s survival and freedom.

The story is a bit different from other military science fiction series in that it involves a plot that extends beyond the local story, a simple fight for a colony’s freedom, to a grander fight for freedom that extends through space and time. That’s because there’s no faster-than-light travel. The people in this universe travel in stasis pods, extending their lifetime across hundreds of years and allowing them to utilize weapons from multiple eras.

It’s the context for this larger fight for humanity’s freedom that is intriguing, and it’s where the series becomes very promising since the universe that the protagonist and his friends finds themselves in will become a chaotic free-for-all, opening up subsequent stories to the imagination.

Behind all the storytelling is Sergeant Orion, the keeper of Strange Company’s logs and stories. While Orion records the backgrounds of his comrades for the record, he also tells the story of the company’s contract and fight on Crash. This mix of perspectives can feel confusing, and the emotional tones of the storytelling can be a bit too much considering his role as a historian.

Strange Company by Nick Cook is more interesting than the standard military science fiction fare many readers enjoy. The book includes all that makes the military part engaging: firefights, explosions, cyborgs, ships, and unique weapons. But it also captivates with the promise of an intriguing plot that goes beyond just shooting people and blowing things up.