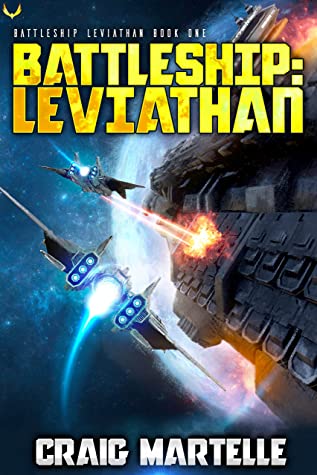 Major Declan Payne and his team board and explore an ancient but powerful Progenitor warship named Leviathan in order to unlock its mysteries and power in order to give humans an edge in a war against aliens known as the Blaze Collective.

But the Progenitors in this novel have not only disappeared, bu they’ve left evidence of their existence behind in derelict ships. It’s the discovery of one of these super advanced ships that forms the basis of the plot in this science fiction series.

The story follows a team of elite soldiers lead by Major Declan Payne as they board and try to unravel the mystery of the Progenitor derelict warship named Leviathan.

Team camaraderie and character development is done through the team’s dynamics and through sometimes forced-feeling dialogue. For a team of veteran soldiers, there’s not much cursing going around. That may be because, as another character comments, there are more women in the team than other writers would have included.

Regardless, the dialogue feels a bit stiff at points, but the story otherwise flows smoothly, moving from one conflict to another and eventually concluding on a resting point for this first book.

Fans who prefer reading about artificial intelligences may enjoy this book more than others. Tidbits of information regarding Leviathan and its history are peppered throughout the novel, and these tantalizing clues give readers a glimpse into the culture and lifestyles of the Progenitors.

Their eating habits, sleeping habits, and even personalities are revealed as the story progresses, and later, readers learn what happened to these galaxy-spanning galactic ancestors. Their fate is just as intriguing as the ship Leviathan, and here’s hoping for more on that front.

One of the drawbacks to military science fiction stories is that there’s not much revealed about the other side of the conflict. Little information is provided about the aliens attacking humanity, and not much is revealed even when the opportunity to reveal information arises.

Instead, these warring aliens are portrayed as relentless, sometimes mindless, and ruthless. There’s no humanizing them despite the fact that they must have some reason for attacking humans.

Craight Martelle’s Battleship Leviathan is a fun military science fiction book that breaks through the severity of the conflict with some lighthearted humor among the characters. The dynamics of the team make the story a bit more enjoyable while still retaining the mysterious atmosphere that surrounds Leviathan and its creators.

Read other exciting space operas below.