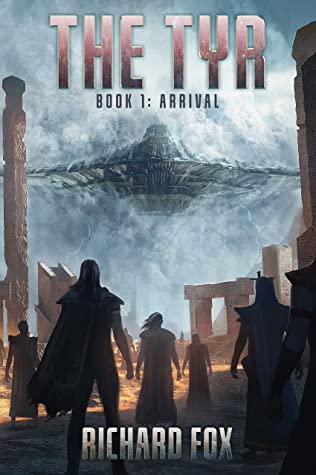 Daniel Clay and his family must fight against a human corporation’s attempt to eradicate and colonize the alien Tyr homeworld.

Arrival is another exciting series to come from the Ember War writer Richard Fox. Readers who love the engaging writing and the action scenes in Ember War will also love that similar style of writing in this new series.

What readers may notice immediately is that the Tyr aren’t too different from humans during the early days of the space age in their social and technological structures. In fact, readers may even be forgiven for mistaking the Tyr for humans during the middle of the twentieth century. Other similarities abound in the book with regards to technology and society.

By building upon a familiar structure, Fox is able to have readers “fill in the blanks” when it comes to the Tyr, a reptile-like humanoid species of aliens. What differentiates the Tyr is their origin story, which is mentioned throughout the story and forms the basis of their religious beliefs: the Tyr were placed on the planet by the gods, who remain a mystery.

It’s the mystery of the gods who transported the Tyr to their current home that is the most interesting aspect of the story. The questions of who these gods are, where they are, and what their motivations make for an exciting and interesting undercurrent that runs throughout the entire story.

In many ways, Arrival takes the stereotypical alien invasion story and reverses the roles by making humans the invading conquerers against a weaker, both physically and technologically, alien foe, the Tyr. And of course, the invading humans, like any other invading alien, need to be some kind of evil to justify the invasion. Enter the Corporation.

The Corporation, a purely capitalistic entity that exists to profit off life in the galaxy. So the portrayals of the CEO, shareholders, and directors aren’t very pleasant, with many of those executives exhibiting numerous physical ailments and deformities. And their continued existence is supported solely through technological advancements. Perhaps the the story is, in a way, a criticism of a capitalist system run amok and taken to its logical conclusion.

That’s what makes the Corporation evil. Their decisions are based purely on profit, including decisions that result in the life or death of their employees. Justifiably evil, the Corporation’s invasion of the more religious Tyr can be seen as a proxy war between two ideologies of capitalism and theocratic monarchy. Given the portrayals and actions of the Corporation and our own understanding of the flaws of capitalism, it’s easy to root for the alien Tyr, regardless of their ignorance.

Fighting with the Tyr and giving them a glimmer of hope against a relatively small but well-armed force is Daniel Clay and his family. The descriptions of technology are just exotic enough to give Arrival that futuristic science fiction feel, and despite the Corporation’s extreme technological advantage, they still have a weakness that the protagonist seeks to exploit.

Arrival by Richard Fox is a fantastic alien invasion story that reverses the role of the more stereotypical aliens-invading-humans story and pits a relatable alien Tyr against a monstrous human invader devoid of compassion. The result is a story that forces readers to side with the weaker aliens, and in doing so, readers must consider the more destructive emotions inherent in human nature