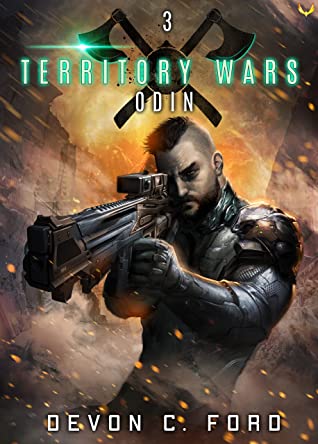 Barton and his Special Operations Group are sent on a mission to capture a crucial New Russian Confederacy food planet, where they encounter a persistent and deadly enemy.

Devon C. Ford’s Odin continues delivering the thrilling and suspenseful action-packed scenes from the first two books in the series.

What readers can look forward to the most is the satisfying conclusion between Barton and his Russian counterpart, Komarov, that was promised in the first book and not quite delivered in the second book. Any lingering disappointment from Komarov’s missed showdown with Barton is more than made up for in Odin as the book nears its conclusion.

The battle scenes between the two militaries are filled with action and suspense relayed through intense firefights. Add into the rumble one man’s festering sense of revenge, a mysterious substance that threatens humanity, and there’s a lot that drives the story forward.

The plot of the book feels a bit random because readers aren’t quite clued into the overall strategy for the war between the Combined States and the New Russian Confederacy. As a result, the missions that Barton and his group of special operations are sent on have a sense of disconnectedness. In fact, short of the connecting thread of Komarov and the substance, it’s easy to forget that there’s a wider war raging between the two sides, with the books having an episodic feeling instead of one continuous story.

The connecting thread between the books that is the mysterious substance continues to intrigue and surprise. Even though not much more is revealed about its purpose and origins, those small clues about the deadly substance are intriguing for the direction of the series, leading to questions that may broaden the scope of the story beyond an internal human struggle.

Ford’s decision regarding the fates of some of the characters may not be liked by readers considering their development in the previous two books. While some of these changes with Barton’s group may have been expected considering his training and the characters in Hades, there’s still a bit of an attachment that may be difficult for some readers to give up.

Another interesting aspect of the story is the unexpected and interesting alliances throughout the story. One such alliance illustrates the depth of Komarov’s desire for vengeance, and this alliance reveals a glimmer of hope for humanity should the true purpose of the alien substance be revealed.

Odin by Devon C. Ford continues to deliver the thrilling action scenes in both ground and space battles that readers have come to expect and love from the series. Whereas the second book felt slow, this iteration was a progression of action-packed scenes that keep readers turning the pages well after they’ve decided to take a break.