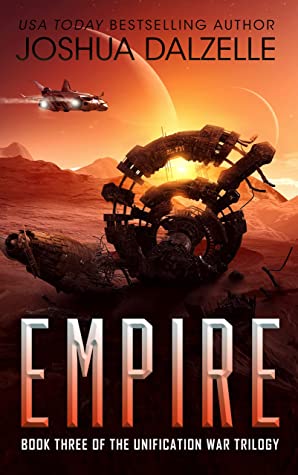 Empire by Joshua Dalzelle concludes the Unification War Trilogy in a satisfying way that is sure to please fans who have become invested in the protagonist Jackson Wolfe and his support cast of characters.

The namesake of the trilogy, Unification War, delivers what it promises to readers, albeit with a slight turnabout that shouldn’t surprise too many readers. The cabal’s success, or lack thereof, isn’t necessarily up for debate—villains in most stories end up being defeated—but it’s the how that makes stories interesting.

And there’s a visceral sense of satisfaction from the fate of the cabal.

As with other books in the series and Dalzelle’s writing style, the action scenes are fun, engaging, and thrilling, with Wolfe facing a reformed Eastern Star Alliance, now Terran Unity, fleet that vastly outnumbers the remnants of the Federation’s fleet after its near extinction at the hands of Kohl and the cabal.

Russo, Kohl’s confidant and captain, takes the place of Kohl, giving the story an almost weird perspective since the shift in previous books was from protagonist to antagonist, giving readers a sense of the two sides in a conflict. Russo, of course, isn’t a cabal fanatic, and readers know his allegiance, so the conflict has a more uniform perspective compared to previous books.

But as previous obstacles and threats have shown, Wolfe is no stranger to unequal odds. It’s the same in this conclusion of the Unification War series with a super secret weapon named Aegis that is unleashed on the Terran Unity with some interesting results.

Aegis almost feels like a cheat, making the conflict between the Federation and the Unity feel one-sided and almost procedural rather than life threatening. Gone is the sense of foreboding and doom that permeated previous books in the series, and while the threat to Wolfe and the Federation still exists from the Terran Unity, the sense of extinction isn’t quite the same.

Loose ends in the form of Kohl and the cabal are nicely wrapped up in Empire, and the conclusion gives a sense of finality to the not only the Unification War Trilogy, but also the Black Fleet series as well, unless some other strong protagonist exists to take up Wolfe’s reins. That’s still possible, considering the story universe is still filled with aliens not yet explored and an Aegis that may or may not be sentient.

Characters from previous books, as well as Wolfe’s own family, make their token appearances, and they feel more like extras on a set rather than engaged and involved characters. Their limited presence and Aegis give the book that sense of a rush toward final, happy conclusion rather than a conclusion that promises more.

Empire by Joshua Dalzelle brings the Unification Trilogy toward a nice, satisfying conclusion that sees mosts of its cast of characters getting the endings they deserve.

Read reviews of other works below.