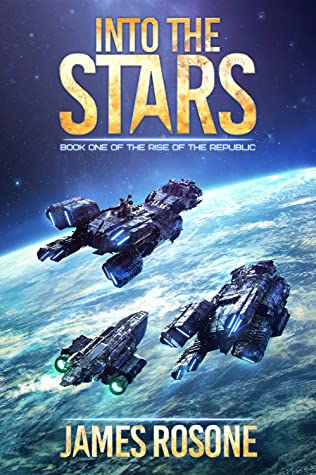 Into the Stars Review

Into the Stars by James Rosone is an interesting and engaging story about humanity’s first foray into a space that is fraught with danger. Throw in an intriguing mystery about humans, some tense space battles, and the result is a military science fiction story that starts an adventure that is sure to be entertaining.

Read enough military science fiction stories, and few will surprise you with their premise: there’s generally some kind disagreement between two parties—politics, ideologies, or even aliens—and this difference is the cause of conflict.

The result is that each military science fiction series or story needs something to set it apart from others outside of just space combat. Rosone manages to do this not only by following humanity’s first steps outside of the solar system, but also by introducing a mystery that keeps readers guessing.

The answer to this mystery may explain not only humanity’s origins on Earth, but it also provides the story with a justification for Earth’s engagement against the antagonists of the story. The portrayal of these antagonists is enhanced during an early scene when one rips the still-beating heart out of a soldier and devours it in a fit of rage.

The mystery of the occupants on this new planet also borrows from some ideas of ancient aliens on Earth. Indeed, a description of the aliens shares some similarities with a certain blue Hindu god. What the answer to this mystery reveals will complicate the history and origins of Earth and its inhabitants.

The antagonist’s monstrosity doesn’t quite disguise the fact that humans are still the instigators in the story. That’s not to say that the story is bad. On the contrary, the story reveals that there isn’t really one good side, but readers align with the protagonists of the story regardless of whether the protagonists are good or bad.

One aspect of the novel—the plot regarding the asteroid-belt pirates—remains unclear. While these pirates operate in the belt and disrupt mining operations, their role in the larger story isn’t as well developed. The result is a storyline that feels a bit diversionary, and the pirates’ purpose remain to be seen, perhaps in the next book.

Regardless of whether the fault for the failed first contact lies with humans or aliens, the conflict that the humans find themselves in is one of survival, and the groundwork crafted by James Rosone in Into the Stars only promises a more exciting and suspenseful sequel as Earth attempts to unite in a conflict against an overwhelming force.