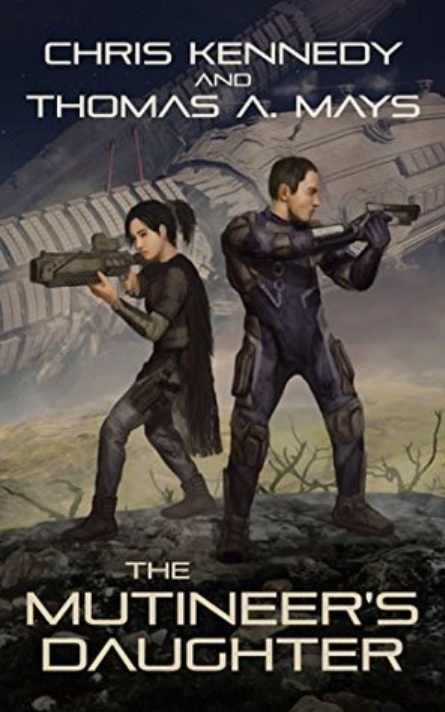 The Mutineer’s Daughter (In Revolution Born Book 1) by Chris Kennedy and Thomas A. Mays

Chief Warrant Office Benno Sanchez makes a breaks an oath to the Alliance of Liberated Systems in order to return and free his save his home planet and daughter from a Terran Union occupation.

The Mutineer’s Daughter by Chris Kennedy and Thomas A. Mays delivers a fun science fiction story that describes space battles and some tense and suspenseful moments within a context that may feel a little trite at times.

Science fiction fans who want a fun story with more realistic space battles will find a good choice here. It’s not too often that science fiction writers write about how the vastness of space affects combat. Instead, they focus on the intensity of the battle while ignoring the physics of it.

But the story doesn’t shy away from discussing the doldrums of space battles involving kinetic weaponry—even lasers, given the vast distances, would be unlikely to hit a moving target. What readers have here is one way in which two ships would fight each other in space. They’d have to close to short enough distances for effective weapons fire.

However more realistic the space battles are, both space and ground battles are focused on more individual or small group encounters rather than massive fights. Larger ground fights are summarized rather than described, so the result is that the situation on Adelaide, the protagonists’ home, feels less severe.

What the writers manage to do well is to convey the sense of emotions of the protagonists, Chief Warrant Office Benno Sanchez and his daughter Mio. Readers get the impact of Sanchez’s desperation and conflict between family and duty. Similarly, Mio’s behavior seems to be of a stereotypical teenage girl growing into adulthood.

In fact, Mio’s portrayal, like her foot stomping whenever she wants people to pay attention, feels at times authentic and confusing. She behaves like readers would imagine an impetuous teenage girl would behave. But those moments are contrasted by moments where she displays an unusual perception, like when she’s aware and more intuitive than the professional soldiers in the tunnels. These contrasting moments really paint a confusing picture of Mio that is frustrating at times.

The overall plot of the story, while seemingly a bit narrow in scope for this first book, promises to open up to something more in subsequent books. The authors remind readers at the end of the story what problems remain unresolved, breaking the sense of immersion.

The Mutineer’s Daughter by Chris Kennedy and Thomas A. Mays is a character-driven story that manages to evoke emotion and tell a fun science fiction story that includes tense ground and space battles. While the context of the story isn’t particularly original, the characters are highly relatable, causing readers to feel invested in the fate that awaits them in the sequels.