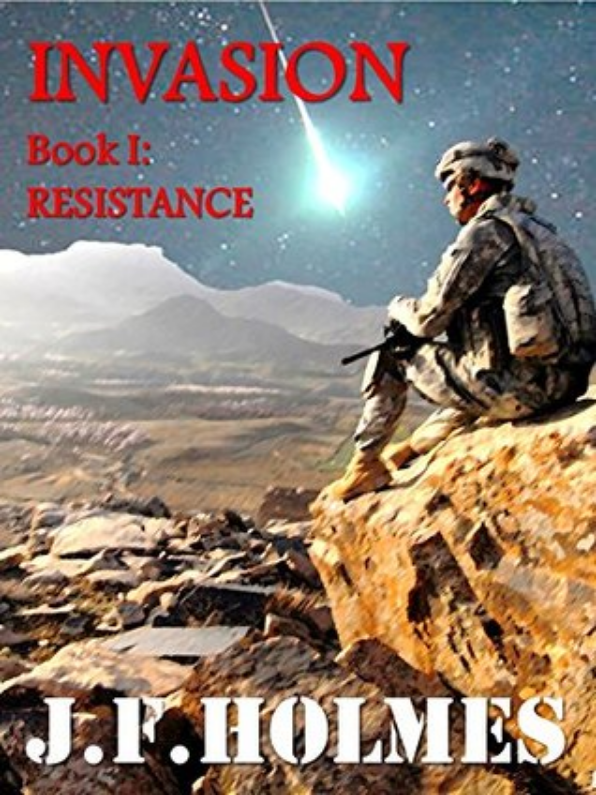 Earth has been invaded and occupied by aliens collectively known as the Invy. Now, what’s left of humanity learn to work together to overthrow its occupiers.

Resistance, Book of Invasion or The Invy War by J. F. Holmes engages readers with a story of a greatly diminished human population in a last, desperate struggle against a technologically superior force.

The story is written well with moments of intense action punctuated by other moments of loss and sacrifice. Readers will be engaged throughout the story.

Aliens collectively known as the Invy, short for Invaders, have decimated the human population and now occupy the planet with troops on the ground and satellites and ships in space. What remains of the survivors around the world must work with what they have in order to resist and perhaps overthrow the occupiers.

General David Warren was in charge of the fleet that failed to resist the initial Invy fleet, leading to a bombardment and occupation of Earth. General Warren lives quietly in the country until he’s discovered and once again thrust into the action.

While the story takes place in the United States, other actions take place around the world.

Resistance, the first book of the Invy War, by J. F. Holmes engages readers with the plot of humanity attempting to overthrow its oppressors in one last desperate action. It’s a book with a fairly familiar story for readers who love plots about humanity resisting its technologically superior invaders.

Reading the story, I couldn’t help but draw some parallels to the television series Falling Skies and to a lesser extent, The Fear Saga by Stephen Moss. Some ideas in the book seem familiar. For instance, the occupied sometimes collaborate with their enemies to benefit . This aspect of helping the enemy makes the book appear a bit more realistic. After all, some people helped the Nazis despite having their normal lives disrupted by them.

Holmes combines familiar science fiction elements to create an engaging story where readers too learn to hate the Invy just as much as the story characters must hate their occupiers. Certainly, the mention of the devastation the Invy caused on the planet, along with the deaths of so many people, must create some feeling of hatred and resentment. And many of the characters in the book share these feelings toward their conquerors, establishing a strong motivation for action.

Fight scenes are described fairly well, with some hand-to-hand combat that seems pretty brutal. I’m not sure why such battles are necessary considering the weapons the aliens have. Two scenes come to mind with characters fighting enemy patrols using blades. Other battle scenes illustrate the sheer power and domination the Invy can bring upon humans, so the manual combat scenes feel unnecessary.

There also appears to be a large discrepancy in motivation regarding the Invy. They wantonly destroy a chunk of the human population, yet they uplift species and heal the environmental damage caused by humans. What’s going on here? They allow some humans to live, yet they mercilessly kill humans, sometimes on a whim. The absence of a clear and reasonable motivation makes the story feel a bit random at times.

I’m not sure how I feel about the protagonist, David Warren. The beginning of the story illustrates Warren as a weak, timid person. His character development doesn’t feel natural, as there’s no obstacle that seems to shape the person. The event that finally motivates Warren to leave his home almost appears to have no effect on the man. Consequently, Warren isn’t very relatable, though this perhaps makes him an interesting character. However, other supporting characters are written well, and the dialogue seems realistic enough.

Many science fiction stories involving invasion and rebellion can be fun to read because the sheer difference in power results in a desperate struggle that makes for an interesting and fun story. Sure, most readers know that the humans will ultimately win, but that doesn’t really detract from the story.

Resistance by J. F. Holmes is a great start to larger stories that promise a lot more action and excitement. With the context and background of the story established, the next book in the series can only be better.