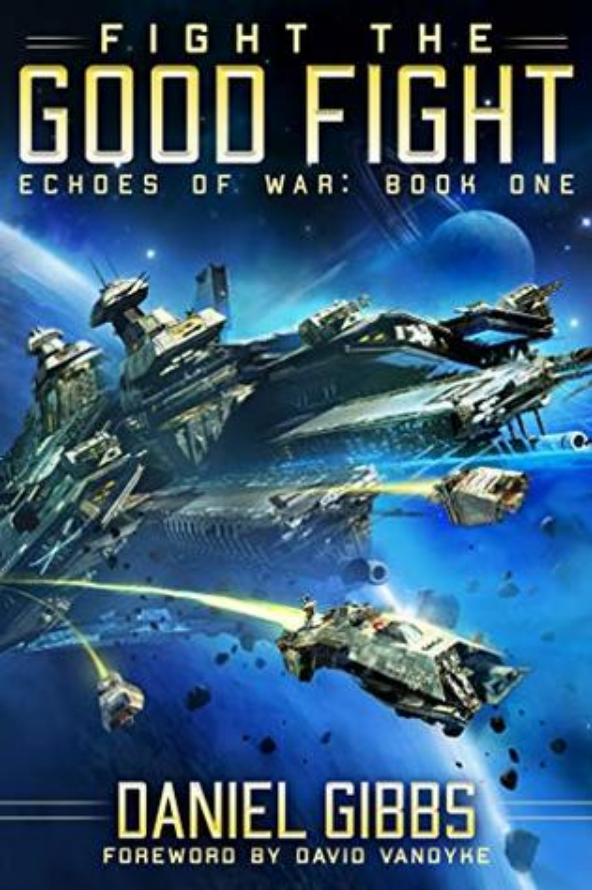 Fight the Good Fight by Daniel Gibbs is a story that does justice to the military science fiction genre. Readers who appreciate military structure and operations will appreciate the story this book has to offer. There is plenty of action to enjoy from ship-to-ship combat to troop combat, though the latter is a little lacking in description.

But the space combat is interesting and contains what readers have come to expect from battles in space, including strategy, various ship types, and plenty of weapons. While there’s not much in terms of discussing the weaponry or the science aspect of the fiction, the space battles were still satisfying to read.

But where the story kind of falls flat is the motivation that pushes the League of Sol to fight the Terran Coalition. There doesn’t seem like much reason for the two forces to fight each other outside the fact that one is a not-really communist empire fighting to absorb a capitalist one.

And in that respect, what’s revealed about the League of Sol isn’t really creative—the leaders of the League are said to ravage worlds for their own gain while purporting equality. Consequently, the plot feels a little bland Perhaps a twist, with the League of Sol representing a truly utopian society attempting to save or reintegrate humans, would give the story a much needed unique twist.

Another aspect of the story that I felt was out of place was the emphasis on religion. At certain points in the story, readers are led to believe that in addition to the war for ideological supremacy, there’s also a religious war going on. That is, the Terran Coalition, representing religion and perhaps the moral high ground, is defending itself against the League of Sol, a group of soulless, non-religious people who actively persecute religion.

Despite the overt social commentary, I did enjoy the inclusion of the different aliens in the story. That the aliens exist in the story universe make the story more interesting, and I found myself reading more in the hopes of discovering more about the history between the humans and aliens. I was really excited to read more about the aliens.

There’s something to be said about military science fiction stories that deliver on certain expectations like fleet battles with maneuvers by the book: escorts provide support while capital ships pound away at one another. Meanwhile, fighters and bombers act as support. Readers otherwise too often get one-on-one ship battles that don’t often illustrate the scale of a war. Written well, the entire battle scene is like a well-choreographed dance.

Space battles are the strongest aspect of Fight the Good Fight by Daniel Gibbs, and these battles are done well enough to almost forgive the otherwise lackluster plot. That said, the conclusion of this first book does promise a more improved and exciting story, and I look forward to the space battles.