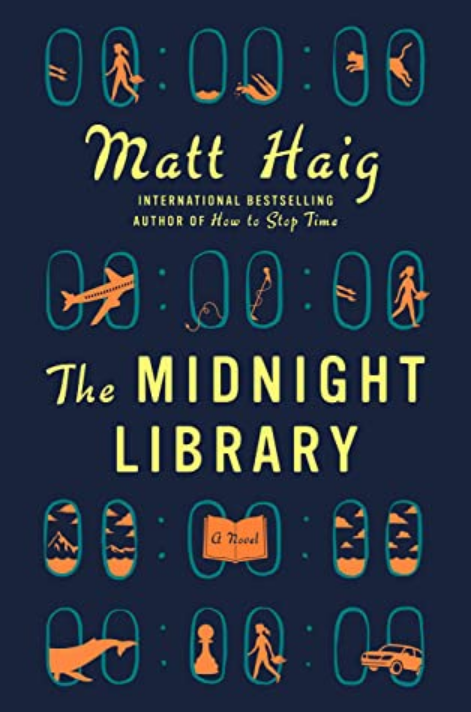 The Midnight Library by Matt Haig

Nora Seed dies and discovers herself in a vast, limitless library with an infinite number of books that represent all of her possible lives. She explores the various lives that she could have had.

The Midnight Library by Matt Haig is a novel that looks at that singular question most, if not all, people have: what if? What if, wandering in the woods, we took the more well-worn road instead of the less traveled one? How might our lives have turned out? Much like a Choose-Your-Own-Adventure book, Nora Seed, the protagonist, explores each life possibility in this mysterious library that exists in some super-quantum state where all possibilities exist.

While Nora, the protagonist, may appear at times to be as melodramatic as readers imagine teenagers to be, her eventual work-through of her issues is commendable, and frankly, quite the relief. Nora’s choices and possibilities are fairly predictable with plenty of foreshadowing and direction. Her decisions shouldn’t be a surprise to most readers, especially given the uplifting platitudes about life captured in some artsy font and posted on social media.

There’s a lot to unpack in the story. First is that many readers may see a bit of themselves in Nora: they’re not where they thought they would be in their lives. It’s no coincidence that Nora’s a philosophy graduate. At the heart of her issue is an existential dread that has been developing until a series of unfortunate events leads to the Midnight Library, a place that New Age readers may recognize as an Akashic library of sorts. It’s here in this library where Nora explores the infinite possibilities that her life permits.

Some of the discussions of physics seem like a weak attempt at rationalizing the seemingly absurd premise of the story. But many people believe in the immortality of the soul, reincarnation, and the multiplicity of lives that a soul can experience, whether those lives are in series or in parallel. So it seems a bit unnecessary to have to justify the phenomenon with another “Slider,” as the people who experience this library call themselves. I’m not sure if the term is a nod to the 1990s television show (the first few seasons of which were a favorite of mine), but the term and the television show are apt representations of the plot.

In fact, the introduction of another Slider only creates an expectation that isn’t really fulfilled, leaving readers with questions about the nature of the universe that aren’t really answered. Maybe leaving out this aspect of the book would make readers dismiss Nora’s experience as one final attempt of a mind not yet ready to relinquish its grasp on life.

Nora searches for meaning and purpose in her life. She explores life as a rockstar, an alcoholic, and the many lives in-between. But the answer she seeks isn’t some tangible object that will instantly solve all of her problems. There’s just no panacea to life, but Nora arrives at something close to one. The book provides a huge hint for readers in the references to Nora’s favorite philosopher Henry David Thoreau.

There’s not much that’s a surprise to The Midnight Library. The story progresses much as readers would expect it to progress, with the anticipated rejection of fortune and fame. After all, there’d be no story if Nora simply accepted a life of a rockstar–there’s no lesson learned there. But one of the endearing aspects of the story is seeing Nora grow and mature. She learns lessons from living these wildly different lives that she’s unable to learn living a single lifetime confined within the small perimeter of her town of Bedford.

In reading about Nora through Matt Haig’s The Midnight Library, readers consider their own possibilities and potentials. While readers can’t undo an action or experience a different life, they can still learn from the story. The premise of the book will open up for many readers fields of spirituality, philosophy, and physics that will perhaps be of some help to their own existential dread.

Read reviews of other books with similar themes.