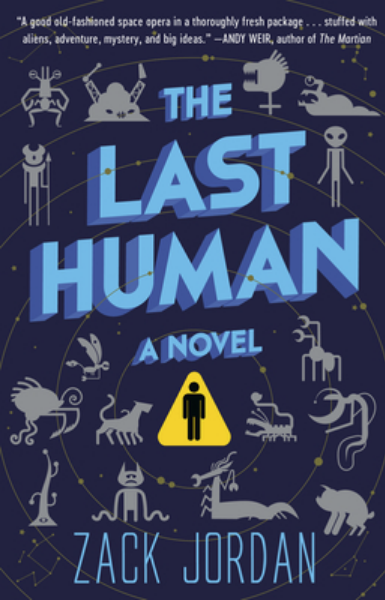 The Last Human by Zack Jordan

Sarya, the last human alive, searches for her own identity in a universe where humans are despised. Meanwhile, a greater conflict between two forces rages and forces Sarya to make a choice that will affect the galaxy.

The Last Human by Zack Jordan delivers a refreshing take on a science fiction space opera that manages to tell an engaging story without the use of battles. A lot of space operas rely on battles to propel the story forward, but Jordan captures the readers’ attention with a protagonist who has an interesting backstory and a mystery about the human race that is just waiting to be uncovered.

Stories that have the “last” human alive in the universe are fairly depressing. Readers don’t like sad stories, so it’s no big surprise what one of the likely plot “twists” are when it comes to books with this premise. That’s because no one wants to read a story wherein the sole survivor of the human species leaves the story that is the universe.

The Last Human manages to keep the readers’ attention by gradually revealing the fate of humans and giving readers a different perspective on luck and free will. Namely, what the characters attribute to luck is instead a plan by beings who are far more intelligent than any single alien can imagine. Some readers may attribute luck or coincidence to some divine plan, but this isn’t the case for Sarya.

One of the enjoyable aspects of the book is the varied cast of characters. Their variety and the different intelligences in the story add a level of intrigue. It almost gives the book a sense of a universe filled with a diverse collection of aliens, just without humans.

Perhaps the most intriguing aspect of the story is the conflict between Observer and Network. The battle between good and evil that exists in every story is reflected through these two characters. These two beings, particularly Observer, could have been given more book time. Their backgrounds are fascinating, but desperately lacking, and I found myself more intrigued by the seemingly timeless fight between a biological intelligence and an artificial one.

The Last Human by Zack Jordan is an interesting story about a battle between chaos and order, and caught in the middle is the last human female alive who is raised by a terrifying black widow. Sarya’s desire to connect with her humanity leads her on a quest that, like her human forebears, disrupts the established universe.

Read reviews of stories with similar premises or themes.