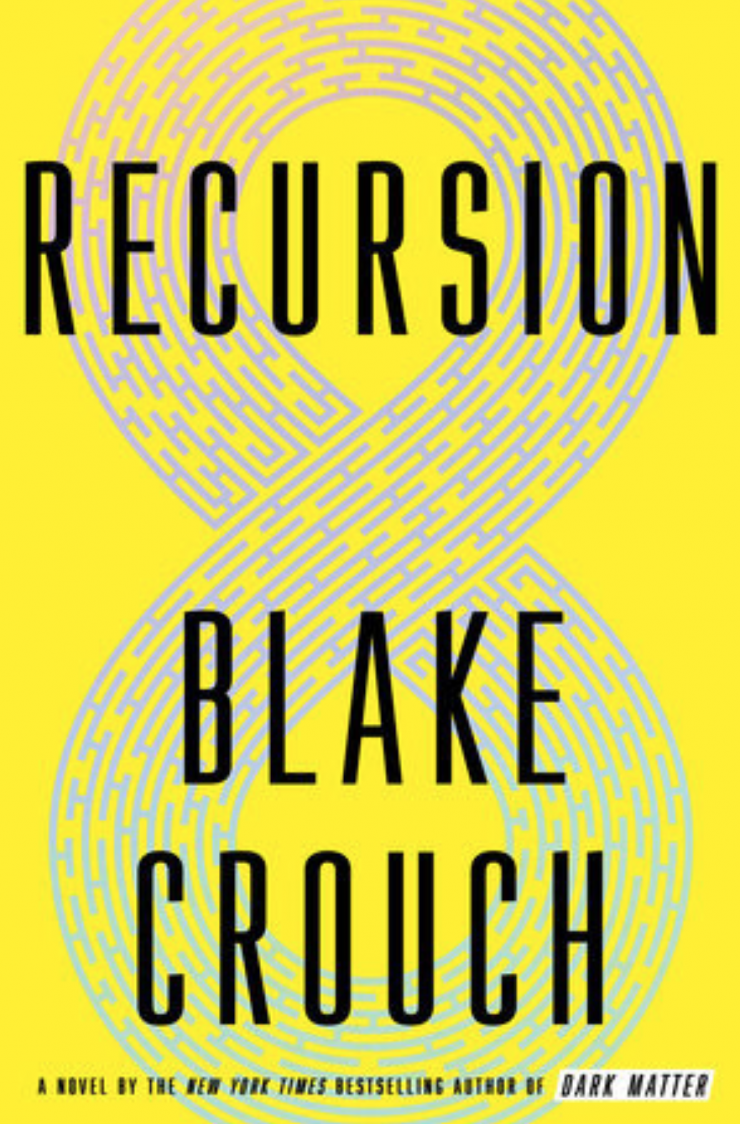 Helena Smith must stop the world from using her memory travel machine because each use adds a lifetime of memories for people whose memories are affected. When the changes to reality become significant and reality shifts for everyone, people can no longer deal with the changing realities.

Blake Crouch’s Recursion provides a fascinating look into the social consequences of having multiple lifetimes of memories. What follows from Helena Smith’s memory travel invention is just one illustration of how too much power can be a corruptive force.

If you enjoy stories about alternate realities and time travel similar to Crouch’s Dark Matter, then Recursion is a must-read book.

Barry Sutton is a detective whose investigation of a suicide as a result of false memory syndrome results in his entanglement with Helena Smith, a neuroscientist who develops a machine that allows individuals to travel backwards in time to an earlier memory.

Helena’s invention is used for selfish reasons, and the constant time travel results in social and global consequences because of the memories of alternate lives crashing into the minds of people at any given moment.

When the technology is unleashed into the world, any government or terrorist organization can use it to wreak untold destruction. Helena must somehow find a way to stop people from remembering the existence of the chair.

Helena Smith is a neuroscientist who is investigating memories and attempting to develop a device that will allow people with diseases like Alzheimer’s to save their memories before the disease destroys them.

Barry Sutton is a police detective whose life was changed for the worse when his daughter is killed by a hit and run. His life changes when he’s called to the scene of a suicide, where he encounters a woman suffering from false memory syndrome.

The story takes place in the United States during the modern time.

There’s a lot to like about Blake Crouch’s Recursion. Following on a similar theme of travel through alternate realities from his previous book, Dark Matter, Crouch continues his exploration of the impact of time travel. Only this time, the impact is global instead of limited to a just the protagonist.

The story takes a little bit of time to establish a foundation for the main characters. This build-up may seem a little slow at times, but the return is well worth the investment.

So many of us often wonder what we could have done differently in the past given our current knowledge. Surprisingly, only a few characters really benefit financially from going back in time. The biggest one, Marcus Slade, goes back and turns himself into a tech billionaire using his knowledge, but most others, like Barry, go back in order to undo mistakes and regrets.

Slade’s countless trips back in time don’t really result in wealth every single time. Indeed, by the time Slade recruits Helena at the beginning of the story, he’s already shed any attachment to material wealth. I suppose being able to go back in time makes earning billions of dollars pointless since it’s all gone once a return trip is made.

In that scenario, knowledge is more important, which is why he’s paying so much attention to Helena’s progress at the start of the novel. Money doesn’t seem to have much significance in the story, but Slade does mention the countless times he’s gone back.

Maybe after awhile, extreme wealth loses its allure. Too bad it takes multiple lifetimes to come to the understanding that chasing money only for the sake of money is meaningless.

While Helena benefits from her knowledge of stock movements, no one really wins the lottery in the book. Instead, what we get from characters is the desire to influence the world. There aren’t any “bad” characters, excepting the terrorists, in the novel. Even Slade had a positive vision for the future he wanted to create, though we’re never told quite what that vision is.

What Crouch does well is to bring the consequences of this invention to a logical conclusion, though I hope that this is the only solution since the story raises some interesting questions about a the idea of reincarnation.

That’s what the book does very well: the story allows readers to ask themselves, “What if?” And I think given the opportunities do go back, many people would eventually grow weary of working hard just to accumulate wealth. I also imagine most of us would at least devote a few lives toward that goal though, and in that sense, Slade is perhaps the most relatable character.

Barry and Helena’s relationship is romantic. There’s an implication there about the the existence of a soul mate. Helena’s willingness to spend each lifetime with Barry is touching, especially given the redundancy.

Blake Crouch’s Recursion is a well-written book that provides some fascinating insight into how people and nations would react given the invention of time travel and the awareness of alternate realities.

Want to read a book with similar themes? Check out The First Fifteen Lives of Harry August by Claire North.