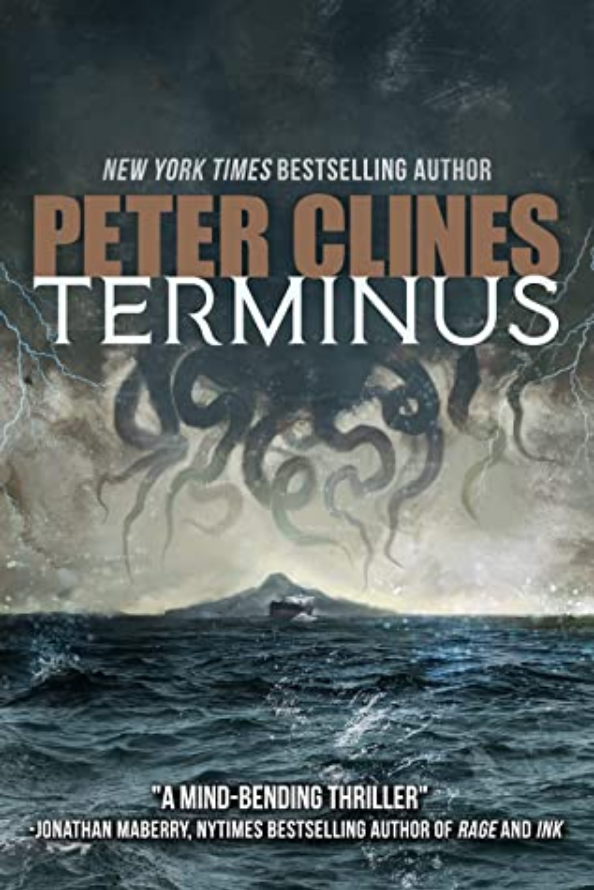 Murdoch and his Family go on a quest to some distant uncharted island to destroy the Machine and allow the Great Ones to come to Earth. Meanwhile, Veek and a group of sailors try their best to unravel a mystery and save the world from being devoured.

Terminus by Peter Clines continues the horror science fiction story begun by the first book 14. Perhaps the best aspect of this book in the series is that it combines plot elements and revelations from previous books into a more cohesive story that answers some of the questions posed by the former books.

If anything, this fourth book in the series is perhaps my favorite. It doesn’t have that slow, plodding pace that previous books had, and it gets straight to the point of the story by avoiding long commentaries about the characters. There was certainly room to discuss Anne, Murdoch, and the family, but doing so would add a level of fatigue to the story that only religious zealots can bring. Still, a bit of information about The Family would have been nice.

Veek’s return did bring about a bit of surprise, and it was a pleasant memory when she discusses her friends, or the other characters, in the novel 14. In a sense, Terminus is more of a sequel to 14, and the story-building that was done in 14 likely allowed the plot in Terminus to be much more streamlined.

The questions readers may have had after reading 14 are answered in Terminus. Readers learn about the history of the machine, its origins, and its purpose. Plot elements from other books, like The Fold, are revealed and integrated into the story. What Peter Clines does really well is to take all those seemingly disparate elements introduced in the previous three books and combine them into a cohesive, action-packed, horror science fiction story.

The one character whose purpose I couldn’t quite understand was Doug. Not only is he a pretentious character, he doesn’t really have any role in the story except to annoy the other characters. I suppose being a filmmaker gives Doug the excuse of having the video equipment that provides some utility to other characters, though this is a stretch considering the prevalence of technology today. Having characters whose roles are a bit unclear just makes the book more crowded.

While the story was fantastic, the conclusion left me with a feeling of being cheated out of a good ending. The feeling is similar toto what people might feel about watching a really good movie or scene only to have the character wake up and discover that everything that preceded was just a dream. All the attachments to the story, characters, and setting disappear upon awakening, leaving readers feeling a bit cheated.

Terminus by Peter Clines is perhaps the best book in the Threshold series by far, and it manages to combine elements and answer questions raised from previous books. Additionally, Terminus manages to tell an exciting story without losing itself in too much unnecessary detail.

Read reviews of other works by Peter Clines.