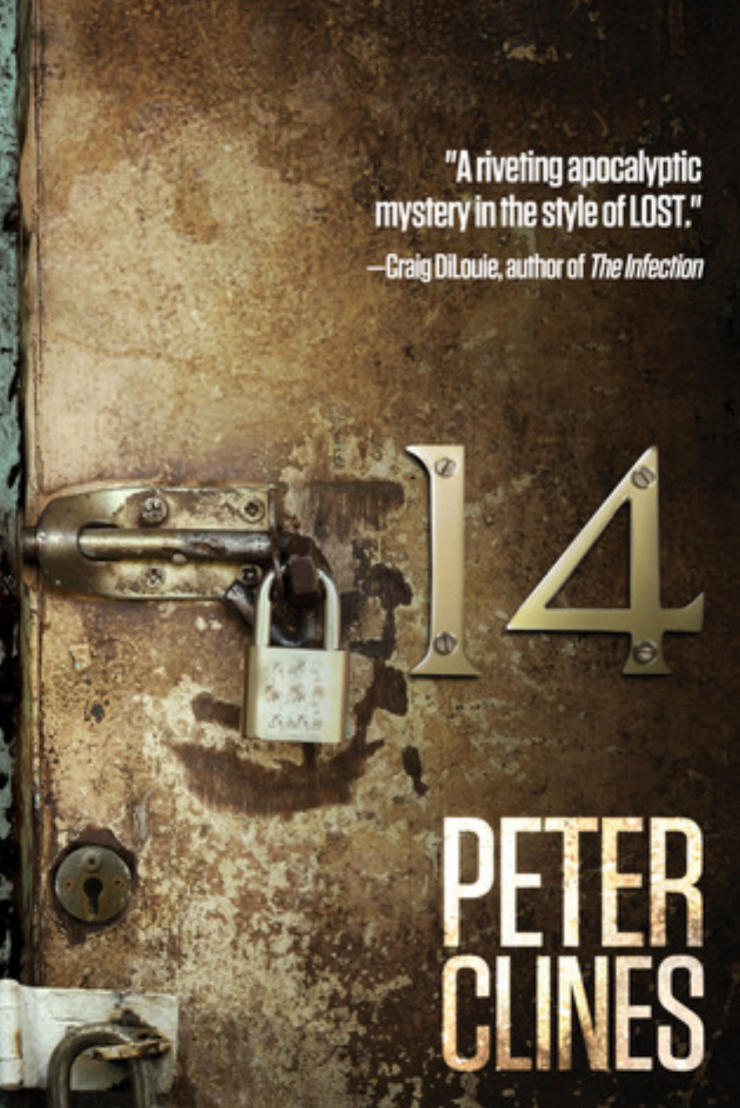 Nate moves into an incredibly cheap apartment building in Los Angeles. It doesn’t take long for him to discover strange and mysterious things like green roaches and padlocked doors.

One aspect of the book that I enjoyed was its sheer plausibility. Protagonist moves into a brownstone apartment in Los Angeles and strange things start to occur. It’s like the beginning of any paranormal story involving ghosts, demons, or poltergeists.

I was a little confused as I was reading this story. How is a ghost story science fiction? My assumptions about the story really misinformed my expectations. Instead, think about the story as a mystery, and the direction of the book will be less confusing.

14 is fun, mystery thriller that provides a good introduction to the rest of the Threshold series in terms of writing style and subject matter. I actually read The Fold before I read 14, so the review is a little skewed in that respect.

Nate moves into an old Los Angeles brownstone apartment with amazingly cheap rent, utilities included. He notices a bright green cockroach on the day he visits the apartment, but that doesn’t stop him.

Soon, Nate notices other discrepancies and irregularities with the apartment building, and he and the other tenants explore the apartment and uncover its secrets.

Nate’s neighbors are the other characters in this story: Mandy, Roger, Tim, Veek, and Xela.

The setting is an old Los Angeles brownstone apartment building in the present time.

One of the appealing aspects of this book is that it’s set at a time and place that I can relate to. I’ve lived in Los Angeles, and the names and location references are all familiar to me, so the book immediately caught my attention within the first few chapters.

Because the book is set in the present time with familiar details, I also felt like this could be happening right now. Somewhere in Los Angeles is a mysterious apartment building filled with seemingly paranormal mysteries.

The only fictional aspect about the book is the rent Nate pays: a measly $565 per month, utilities included.

The characters may be relatable for many millennials. For instance, Roger is an engineering graduate from San Diego State who had to work at Target because he couldn’t find a job. The other characters also have their own financial struggles.

Like his other works, Clines takes his time building up the relationships between characters and building up to the big reveal in the novel. So readers who enjoy having deeper character backgrounds will like not only 14, but The Fold and Dead Moon as well.

The interaction among the characters done through some well-written dialogue. There are some moments where the dialogue seems a little too forced, but generally, the conversations seem realistic.

What Clines does well is the buildup to the mystery and the reveal. Readers are introduced almost immediately to the green cockroach. But then more paranormal or supernatural events are introduced, and these new phenomenon soon get to a point where the characters can no longer ignore them.

Little clues, like the green cockroach, are later used in The Fold, and a better explanation is revealed in that book. These kinds of small tie-ins in the series will reward more detailed and patient readers.

On that note, readers who expect a lot of action will be disappointed. If you’re one of those people, you’ll want to adapt your expectations: the story can be slow because of the buildup. But if you go along with the story, you’ll find yourself invested in the characters and curious about the events.

I wasn’t too thrilled about the romance in the story. That part seemed a bit contrived to me, though I suppose in real life, romance can and does bloom during difficult times.

The story takes even more strange turns as the characters uncover the strange phenomena. Even though the writing felt excruciatingly slow at times, I kept with it simply because I wanted to know what the heck was going on. Is Clines going the paranormal route? Or is he going to go the science fiction route? This uncertainty made anticipating the conclusion that much more difficult.

Some of the stranger phenomenon are: inexplicably long tunnels underneath the building, the availability of power despite being disconnected from the power grid, and words scrawled on the wall.

I suppose the uncertainty is what kept me in suspense. Many books have obvious conclusions, and Clines manages to confuse readers simply because the mysteries the characters uncover can have multiple reasons that range from scientific to supernatural.

The conclusion to the story wasn’t expected, but it was very satisfying to finally learn the answer to the questions these mysteries raised.

If you enjoy 14, then you’ll definitely enjoy the rest of the books in Threshold. It’s more of the same in terms of writing and character development. There’s a connecting thread that runs across all three books.

I definitely enjoyed the slower pacing and the attention to character development. A lot of science fiction books need a few books to build up the characters to the same extent that Peter Clines does in his works. But the cost of that development is a slower story.