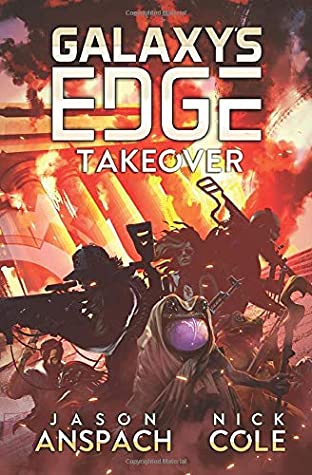 The story follows Carter, a former Legionnaire, who works for a private military contractor with its own agenda on the planet Kublar.

Takeover, the tenth iteration of the Galaxy’s Edge series by Jason Anspach and Nick Cole, provides a bit of a welcome respite from the larger events taking place after Article Nineteen in the Galaxy’s Edge universe.

Regardless of the confusion of which season the books belong to, it’s best to think of it is the tenth book in the series.

While the story doesn’t really follow the main cast of characters in the previous stories, it does provide some clues as to the state of the galaxy and its inhabitants. The planet Kublar once again takes center stage as the battleground for different competing interests, including Nilo, the businessman-turned-mercenary company in charge of the protagonist, a former legionnaire named Carter.

Like the other books in the series, Takeover delivers plenty of fast-paced action, and unlike many other stories, many of the supporting characters lack plot armor, making them just as vulnerable to a lucky shot or blaster bolt as any other faceless soldier.

Some of the political intrigue, ideas, and institutions from the old Republic in previous books remain, adding more fuel to the possibility of a Republic that may yet still exist in some form.

More interesting is the cultural insight into the Kublarans and a surprising character that makes his appearance and prowess in an engaging and descriptive battle that illustrates just how deadly or competent the Kublarans can be if given the right training and motivations.

Prior to this particularly graphic and gruesome scene, the Kublarans were faceless enemies whose sole strategy was to overwhelm through numbers. While that’s still true to a certain extent, the Kublaran warriors alongside Carter show what they can be.

Later revelations from Nilo about his purpose for being on Kublar almost make Carter and his team’s losses seem futile, and this feeling of futility does diminish the story a bit even if there are pointless objectives in war.

Takeover by Jason Anspach and Nick Cole provides readers with some rest from the larger story action that is taking place in the galaxy after Goth Sullus. What roles Nilo and his mercenaries play in the larger story remain to be seen, but if their experience on Kublar is any indication, there’s no foreseeable end to the chaos.