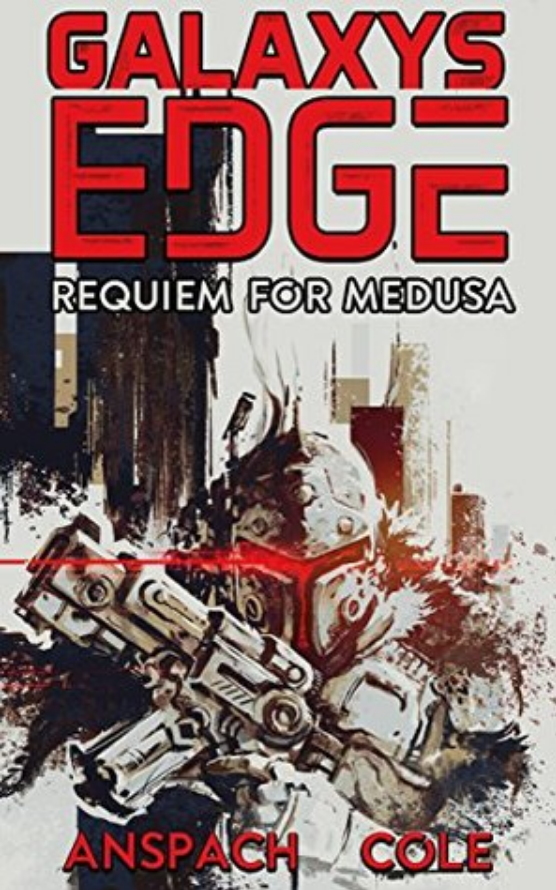 This spinoff provides a much necessary background for the story and exploits of Tyrus Rechs. Reading the Galaxy’s Edge series, I often found myself wondering about Tyrus Rechs. The context provided throughout the books and leading up to Rechs’ death just didn’t feel complete.

This series of books centered about the life of Tyrus Rechs seems to be an answer to the demands of readers who want to know more about the storied Rechs, and this book doesn’t disappoint.

Tyrus Rechs gets payback or revenge for a friend who was betrayed by a bounty hunter.

The two main characters in this book are Tyrus Rechs and Medusa, a fellow bounty hunter. Fancypants, a bot also known as G232, joins Rechs’ crew. Gabriella acts as his handler from the Guild.

The antagonist is Hess, the leader for the Nether Ops team hunting down Rechs.

I’m a very big fan of Jason Anspach and Nick Cole’s series Galaxy’s Edge. The authors create a dynamic universe filled with lawlessness, constant wars, and a corruption that is rotting away the most powerful republic in the galaxy.

One of my desires while reading the Galaxy’s Edge series was learning more about Tyrus Rechs. The authors introduce Rechs as an ancient bounty hunter, and we only hear about him through hearsay and rumors.

When we finally meet Rechs, he’s taken out by the main antagonist in the book, but not before we’re told about how old Rechs is. Or what he went through in order to become essentially immortal.

What the authors provide about Rechs only served to make readers hungry for more, so Rechs’ death in the series was a huge disappointment.

This series that focuses on Rechs gives readers more about the man behind the legend.

I thoroughly enjoyed Requiem for Medusa, and the book gave us some insight into the man. But it’s Medusa who exposes the humanity behind the legend. Medusa, a fellow bounty hunter, is able to pry away the layers of protection around Rechs.

That she’s infected with a nanovirus plague probably helps: he knows that Medusa will eventually die. There’s probably something there between Rechs and Medusa: Rechs is strong, healthy, immortal, and free to do whatever he wants with the vast wealth he has accumulated throughout the millennia. Medusa is the opposite: she faces her mortality on a daily basis, and she’s forced to take on bounties in order to live and provide for her planet.

In this case, opposites attract. Medusa saves Rechs from a mission that goes badly. Their romance seems a little contrived, but it still makes for a good story.

The motivation that Rechs has for getting revenge, or payback, seems a little weak. After all, he’s lived over 2,000 years, so you’d think that Rechs would move beyond vengeance. And his relationship with Medusa seems weak too. He develops some interest in her while he’s recovering on the quarantined planet.

We don’t really learn much about Rechs except that he’s a compassionate character. He believes that bots deserve some rights, but we knew this about him from Galaxy’s Edge.

Overall, the story provides a lot of action and excitement. The plot is fairly predictable. near the beginning of the story, Archangel tells Rechs not to go near the game of death, a Hunger-Games like competition where winner takes all. So readers know that Rechs will eventually participate.

Readers also learn how Rechs gets the AI, Lyra, for his ship. It’s a bittersweet memory. This story, as well as the next, provide necessary background information on a character that further fleshes out the story universe.

If you’re a fan of Galaxy’s Edge, then Requiem for Medusa, the first book of Tyrus Rechs: Contracts & Terminations is a must-read that will reveal more about one of the original founders of the Legion in Galaxy’s Edge universe.

Read the review on Chasing the Dragon, Book 2 of Tyrus Rechs: Contracts & Terminations.