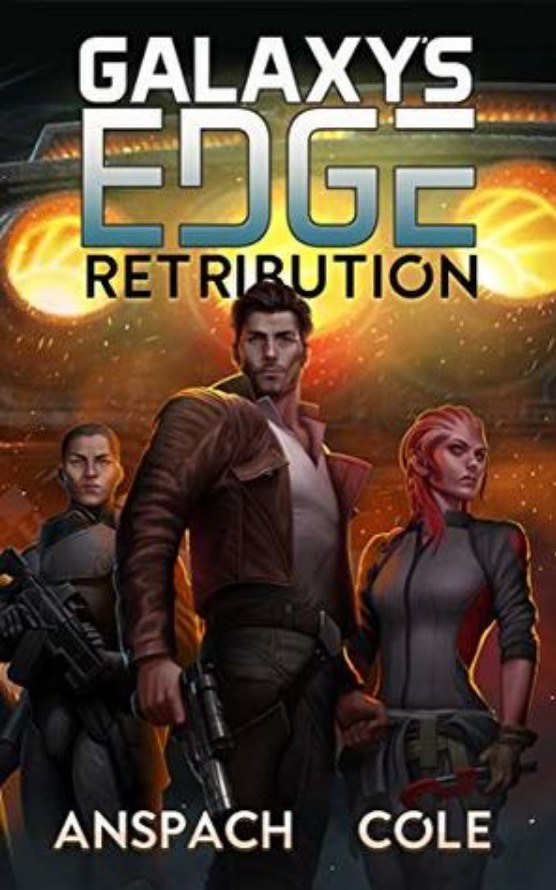 Chhun, Wraith, and Kill Team Victory try to force Article Nineteen in order to save the galaxy from Goth Sullus.

Retribution, part of the Galaxy’s Edge series, is one of the more enjoyable space operas that contain relatable characters, intense action, and a sense of universe that is dynamic and in a constant state of uncertainty.

Few science fiction stories manage to create a sense of a living universe. Retribution manages to continue this quality by telling the stories across several characters whose actions influence the larger story. Fans of the Galaxy’s Edge series will be left eagerly awaiting the next installation.

The remaining elements of the Legion try to bring about Article Nineteen in order to resist the dictator Goth Sullus. Leading this effort is Chhun, Wraith, and Kill Team Victory. Meanwhile, Goth Sullus attempts to consolidate his power and control while other elements, like Kaar, try to pursue their own interests.

The story takes place across many planets in the Republic.

Retribution and Galaxy’s Edge seem to have all the elements of a fun, action-packed science fiction space opera: tons of military action both on the ground and in space, fun and relatable aliens like Skrizz, political intrigue, and an overpowered antagonist intent on shaping the galaxy to his will.

I’m fond of stories that includes ideas of the precursor aliens. I think my bias for this idea stemmed from the story behind Star Control 2. So when Galaxy’s Edge included this theme in the series through Goth Sullus (Casper) and Prisma Maydoon, I became even more interested in the mystery.

Other elements of this book, like Kill Team Victory, Keel/Wraith, and Chhun, are all equally exciting and filled with suspense and action. The constant military operations gives the story a sense of desperation, and the lack of a break between the operations really drives home the sense of urgency the Legion must face.

However much I enjoy the story behind Prisma Maydoon, I felt that her arc in this book moved a bit too slowly. It’s unfortunate that she was stuck on En Shakar. In this place, her story languished a bit, giving the story a sometimes frustrating break between suspenseful chapters.

Luckily, the other stories told are filled with a lot of battles. There are probably more battle scenes in this book and series than other science fiction space operas out there. All the different names of places can be a little difficult to keep track of, but the multitude of planets and aliens speaks to the size of the Republic.

Retribution manages to tell a story of political intrigue that doesn’t get bogged down with too much politics. That’s a good thing because many readers don’t read science fiction for a sense of political drama. There’s an entire genre of fiction and non-fiction with what that theme.

Instead, the story includes enough politics to show a general dissatisfaction of government as a result of politicians who see governance as an opportunity to serve their own interests. I’m a little torn between whether the story’s politicians are a reflection of our own society or if the story’s political affairs are a literary necessity to create drama and intrigue. After all, an idyllic society or empire makes for a boring story.

A lot of major, and some unexpected, events take place in the story that wrap up certain story arcs well. And the conclusion of the Retribution will leave readers eagerly awaiting the next iteration of Galaxy’s Edge. Until the next release, readers can satisfy those desires by reading the spin-offs to learn more about the story universe.

Read other reviews of books in the Galaxy’s Edge universe.