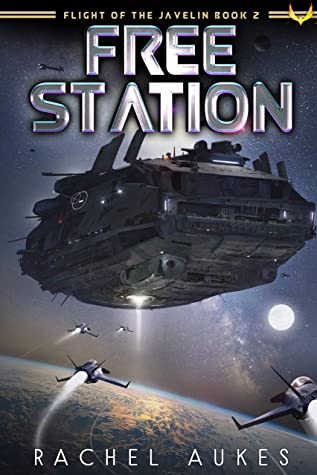 The Galactic Peacekeepers are under attack and Throttle and her Black Sheep must fight back to save the Peacekeepers and the system from pirates.

The plot of Free Station by Rachel Aukes revolves around the Galactic Peacekeeper station in charge of policing Ross system and its inhabitants. The story continues from its previous plot and brings to resolution the main conflict instigated by Anna East in the previous book, Black Sheep.

What Aukes manages to do well is to illustrate characters who aren’t perfect—the characters have their flaws, from the fumbling and awkward engineer Eddy to the main protagonist, Throttle, whose purpose is balancing the protection of her remaining family, the Black Sheep, against her own desire for revenge on Anna East, the Ross system pirate leader.

There’s not much humor in the series, with perhaps the exception of Eddy’s run-in with the pirates, but the lack of constant humorous dialogue actually contributes to the severity of the plot. In some science fiction stories, the presence of humor actually detracts from the story and can hide some of the otherwise dry writing.

Aukes manages to avoid slowdowns in the story by pacing the action consistently throughout the book, and the writing flows well from one obstacle to the next as Throttle and her crew progress through their conflict.

Readers may be a little disappointed about what happens to Anna East, especially given her haughty attitude and the destruction she has wrought in both this story and the previous book. In fact, as Throttle even admits, her fate is a bit anticlimactic, and readers will have to find solace in the satisfying, if not evil, fate of one of Anna East’s lieutenant.

While one major plot conflict is resolved, others are introduced that expand the scope of the story from one small crew from the Trappist system and their struggles to a larger conflict potentially embroiling all of human civilization. This makes for a highly anticipated third book in the Flight of the Javelin series that gives the series a sense of breadth that it would otherwise be missing.

While the new conflict does expand the story universe, it is a little unexpected. The conflict is introduced fairly suddenly, and the epilogue gives readers a brief mention of the antagonist in the upcoming book that doesn’t quite serve to contextualize the otherwise spontaneous appearance of these antagonists.

Rachel Auke’s Free Station manages to nicely wrap up the conflict introduced in the previous book even if the new conflict feels abruptly introduced. The writing and engaging story are sure to be filled with even more action and intensity in the upcoming third book.