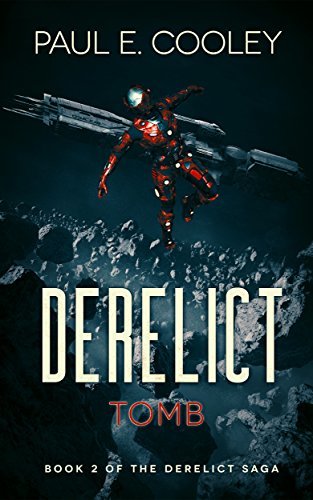 S&R Black and its crew attempt to retrieve the derelict ship Mira when they discover a deadly secret hidden from them by the powerful AIs known as the Trio.

Tomb by Paul E. Cooley delivers the action and suspense where its predecessor, Marines, falls short. In fact, from the start of the story to its conclusion, Tomb doesn’t slow its pacing of action, suspense, and intrigue, making up for the slower buildup in the first book.

Much of the mystery surrounding the Mira and its potential dangers are revealed in this story. The writing moves along at a fairly accelerated pace with the scenes filled with suspense and action the moment the story resumes from where it left off in the first book of the series.

The mystery and substance of the pine cones are revealed, highlighting the dangers the marines in S&R Black face in retrieving Mira. Whereas the “what” of the pine cones and other extrasolar material are revealed, the “why” of their existence and presence aboard the Mira still remain a mystery, with some questions about their provenance becoming even more urgent.

While the dangers of the extrasolar material threaten the marines, more domestic dangers threaten the crew as well. The Trio, a group of ultra powerful AIs, have their own agenda, and their agenda puts the lives of the crew of S&R Black at risk despite their programming to protect human life.

Even Black’s AI is compromised, and the gradual realization of this fact by the crew, namely the captain and engineer, contributes to the feeling of horror already heightened by the presence of the extrasolar material discovered on Mira.

The motivations of the super artificial intelligences give rise to questions about their loyalties and motivations that can go a bit off topic from the main story of retrieving and understanding the fate of the Mira. Even with the Mira’s fate resolved, the Trio’s secretive and independent actions still remain and need resolution, setting up a potential conflict between artificial and biological life.

Kalimura and her squad have to rely on a compromised AI in Black with its own agenda to navigate through a derelict ship whose blueprints are later revealed to have been secretly modified and withheld from the rescue crew. Kalimura’s squad face uncertainty not only from the strange and mysterious ship, but also from the artificial intelligence they have no choice but to trust.

The combination of Black having its own agenda, the extrasolar material, and slow unraveling of the mystery bound in the Mira make for a great horror and mystery science fiction story even if the history of the Mira and the questions surrounding its return aren’t answered in this book.

Tomb by Paul E. Cooley is a fantastic sequel to its predecessor Marines, and it delivers upon its promise of suspense and action created in the first book. Regardless of the fate of the Mira, the questions still remain: what are those extrasolar material, where did they come from, and what are their motivations? These questions only invite a showdown that should be exciting.