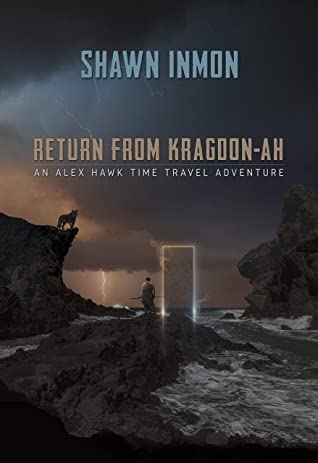 Alex Hawk once again has to save Kragdon-ah from a massive invasion force and other catastrophic events in the world of Kragdon-ah.

Return from Kragdon-ah by Shawn Inmon wraps up nicely the story that began with Alex’s step through the strange time-travel door. Many of the questions raised by that first step, and book, are answered in this third book, and some of those answers are quite unexpected.

As the title suggests, What ultimately happens to Alex is a foregone conclusion. So the ending itself is no surprise, but some of the plot conclusions take a wild turn that, in retrospect, shouldn’t be too much of a surprise.

For instance, the presence of an unnatural door, especially its shape, is suggestive of a technological origin. The world of Kragdon-ah and its intolerance of technology also imply some kind of intertwined relationship. That is, both the door, the fears surrounding the door, and its very existence point to an interesting origin that is later revealed in the book.

The reveal itself, while answering many questions about the mysterious door and the brief history of Kragdon-ah, leaves devoted fans only more questions about the world. In light of some of the revelations and history revealed to Alex, Kragdon-ah becomes a more rich and wondrous place, especially that little bit of information about the different people.

Whereas the only science fiction aspect of this series thus far has been the door itself—the first two books could have just been an action adventure story—this third book really introduces story elements that really make it more science fiction, like the historical events that left Kragdon-ah in its current situation. These events in themselves only raise more questions that are left unaswered.

As with previous books, the action and adventure scenes in the story are just as exciting and suspenseful, though there’s not quite the sense of journey and adventure prevalent throughout the previous stories as Alex travels far and wide on his quests.

Instead, Return to Kragdon-ah takes place locally, with events coming to Alex. These events, along with an unresolved issue from the previous book, are resolved in characteristically Alex ways, even if one of those resolutions deprives readers from an epic battle.

Other decisions, namely the rushed feeling caused through the quick passage of time, give this book more breadth. Whereas previous books took place within a period of a year, Alex lives through several years here, with many of them in domestic bliss. While that bliss is well-deserved, the time jumps contribute to a feeling of the story being rushed.

Shawn Inmon’s Return from Kragdon-ah not only meets readers’ expectations about the action and adventure that has come to characterize the series, but it also engages and intrigues readers with the answers to the longstanding questions about the mysterious door that started it all.