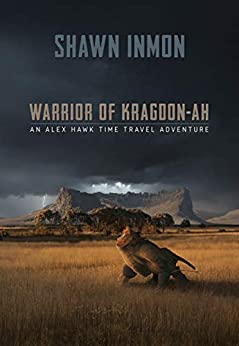 Shawn Inmon’s Warrior of Kragdon-ah sees Alex Hawk return to the world he has forsworn in favor of returning to his world and his daughter, Amy. But a threat to his Winten-ah tribe and family forces him to make a choice between his family and world and the his family through the door into time.

While there was never a doubt as to what choice Alex would make—there’d be no story otherwise—his daughters take the choice away from him, and with nothing binding him to the contemporary, modern world of luxury and convenience, there’s little reason for Alex to remain in Kragdon-ah.

What Alex faces this time is more overwhelming than just a larger army. Now, both Alex and the land of Kragdon-ah faces an existential threat to their own way of living, and while this army could be wiped out with a small assortment of modern weapons, the Winten-ah’s anti-technology stance is a prohibition that Alex can’t just ignore. This restriction also makes the story more interesting, especially with the villains in this story.

That makes Alex’s job all the more difficult since it’s nearly impossible for his tribe to fight the invaders on equal footing. The solution to the tribe’s salvation comes from an old friend and traveling bard, and while the solution seems a bit convenient, it works considering the more rigid values held by the people in the far future world and especially considering Winten-ah’s strong aversion to technology.

Alex’s attempt to save Kragdon-ah are filled with the same suspense and thrills from his adventures in previous books. Only this time, the lives of everyone on the continent are in danger instead of just one person or even one tribe.

Favorite characters from previous books make their appearance, and the introduction of Alex’s daughters to the story add an element of danger that otherwise seems absent given Alex’s immense streak of luck. In fact, threats to his daughters seem more suspenseful and effective than threats to Alex himself, and their presence changes the dynamics of strategy.

What this new threat poses for the continent of Kragdon-ah also raises some interesting questions about the world of this far future. While not much information is provided about the antagonists of this novel, what pieces of information—technology, language, tools—points to a future world that is far more interesting than the what the land of Kragdon-ah suggests in previous books.

Warrior of Kragdon-ah by Shawn Inmon is an enjoyable continuation of Alex Hawk’s time adventure into the far future land of Kragdon-ah, and both new and familiar characters give the story a new depth that makes the adventure a bit more exciting.

Read reviews of other works below.