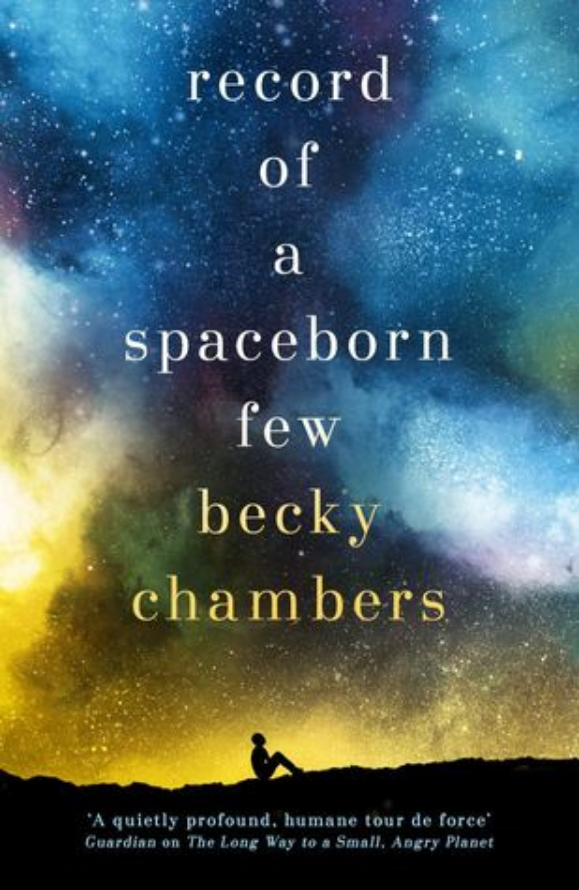 Record of a Spaceborn Few (Wayfarers Book 3) by Becky Chambers

A glimpse into the lives of a small, but diverse, group of residents of the Exodan Fleet.

Record of a Spaceborn Few Review

Record of a Spaceborn Few by Becky Chambers isn’t a story that delivers page-turning action and suspense that readers have come to enjoy from previous two books. In place of action and suspense is a story, almost vignettes, about humans who choose to remain in the Exodan fleet, a collection of human ships that were initially built to colonize other planets but now house a permanent colony of humans who choose to continue a lifestyle that is gradually losing popularity.

There’s no major, serious conflict in this story. No saving the universe. No battle between good and evil. Not even an antagonist against which the characters struggle. Instead, readers get a story about characters whose lives are changed by an event that forces them to re-examine their values and beliefs.

Casual readers of science fiction don’t normally see the genre as a form of social commentary. But Gene Roddenberry cleverly wrapped up social commentary in an exciting and suspenseful television series that continues to inspire the imagination today, even if society has addressed some, but not all, of the criticisms portrayed by the writers.

Record of a Spaceborn Few creates that kind of atmosphere of a society and a culture that is gradually diminishing because its young are choosing more exciting, and perhaps more enriching, lives elsewhere. We’ve seen this happen all around the world today and throughout history: people migrating from rural areas to more urban areas in search of wealth, opportunity, and a future that promises more than a dependance on the land and the whims of a nature that is becoming increasingly volatile.

In this Exodus Fleet, readers are privy to the lives of handful of characters: Tessa, Kip, Sawyer, Isabel, and Eyas. These characters represent a small, but representative cross-section of the residents of the Exodus Fleet.

The impact of decisions made by those in charge lead one character to abandon the fleet in search of something more, while another character leaves the fleet only to return in an attempt to preserve culture and lifestyle.

One character’s attempt to reintegrate forces another character to realize a fault within society that some countries today suffer: the rejection of qualified immigrants and the potential impact of such a rejection in a society that is slowly fading away into obscurity.

Record of a Spaceborn Few can be seen as a mirror into some of the problems the world faces, and perhaps read in the context of COVID-19, the story is illustrative of people having to re-examine their priorities and migrating out of major urban areas like New York City into more rural (or cheaper) areas in search of a better quality of life.

One criticism I have is that the pacing of the story is upset toward the end with sudden jumps in time that feel a bit disjointed given the earlier pacing throughout the story. Years pass by in a matter of pages, giving the story a sense of being rushed even though these jumps provide a sense of completion to the stories of the characters.

Record of a Spaceborn Few by Becky Chambers isn’t a book that delivers the more traditional storytelling device of pitting protagonists against antagonists. But what the book does well is to tell a story of a small cast of characters who are motivated by an event to create positive change to the society they live in. This is a story about the humans who populate the universe in Wayfarers, and these humans, flawed as they are, promise to be contributing members to a galaxy that already sees humanity as a charity case rather than as equals.

Read reviews of other books by Becky Chambers and other great science fiction writers.