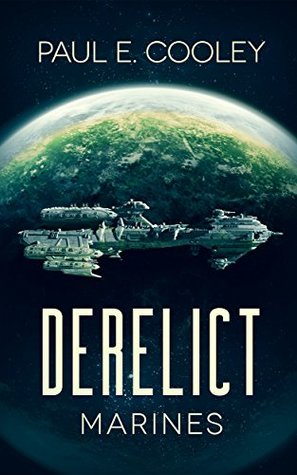 A group of space marines explore the Mira, a ship that has been missing for half a century and has returned to the Kuiper belt.

Marines by Paul E. Cooley introduces an engaging and entrancing mystery about humanity’s first and only large survey ship, Mira, is sent out to explore a neighboring star. When communication with the ship is lost, the ship is written as lost. Until it’s detected in the Kuiper belt by a lonely observatory on Pluto.

Science fiction stories about derelict ships are fairly predictable. Think about all the stories about involving derelicts and a similar pattern appears: they’re usually not quite derelicts, or they’re considered derelicts only from the perspective of the people who discover them.

The drama and suspense surrounding the derelict ship is compounded not only by the conspiracies surrounding its disappearance, but also its impending collision with other belt objects, forcing the government to act quickly, resulting in rushed planning and risky endeavors.

What Marines adds to the derelict formula is a group of artificial intelligences collectively referred to as the Trio. This Trio has its own motivations, and these motivations or purposes don’t often coincide with the goals of the humans in charge.

Exacerbating the issue of the derelict is the fact that the Trio’s goals are hidden from their human masters. This gives the story a suspicious undertone that pervades the plot, begging the question of whether or not these artificial intelligences have become sentient.

Where most science fiction stories tend to gloss over supporting characters, Cooley chooses instead to invest time in illustrating and developing the Corporal Kalimura’s squad of misfit marines. Carbonaro, Niro, Wendt, Elliot. These characters are described and revealed to readers as flawed characters, making them more relatable.

But the focus on character development does slow the story a lot in the first half of the book, making the story feel sometimes like molasses to get through. However, once S&R Black, the rescue ship on which these group of fated marines serve, begins its burn toward the derelict Mira, the story takes on a whole new pacing.

In fact, the intrigue of the Mira in the latter half of the book really gives the story an unbalanced feel because of the slower pacing at the earlier half, possibly causing some readers to put down the story. But they would be missing out on what promises to be an interesting mystery that has potential consequences for the humans in the story.

Marines by Paul E. Cooley is a mystery science fiction novel that takes awhile to warm up to readers because of its focus on character and story development in the first half of the story. Once readers become more invested in the characters and the plot progresses toward the Mira, the story becomes more exciting and engaging, leaving readers eagerly anticipating the sequel, and the answers, to some intriguing questions.

Read reviews of other space operas.