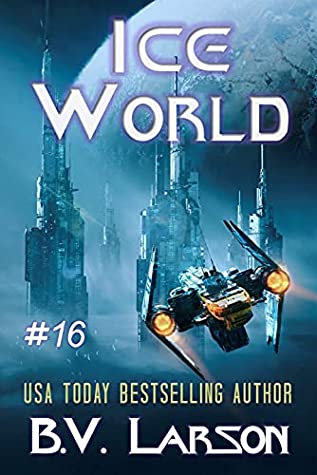 James McGill is caught up in another scheme involving Earth, a powerful public servant, and a fortune in galactic wealth that is sought after by many interested parties.

Ice World by B. V. Larson continues the story of James McGill and Legion Varus as they once again become embroiled in yet another conspiracy that threatens to get the entire planet wiped out by the Galactics.

For its sixteenth iteration, there should be no surprise to fans of the Undying Mercenaries series. Regulars to the series can still expect to see a lot of gruesome fight scenes, a lot of flirting, seemingly spontaneous schemes, and finally, McGill’s death(s)—at this point, a staple of each book in the series.

Along with the normal characteristics of the series, a new plot that reveals more about the Turov family gives Galina much more depth as a character. Her father, a powerful public servant, provides some insight into why Galina Turov behaves the way she does, and a question posed by her father raises an interesting question about how old Galina truly is.

But where the book shines more light into the Turov family, it takes away character development from favorites of Legion Varus. Only a few characters like Carlos and McGill’s daughter make a brief appearance, and Carlos’ presence appears only as an afterthought.

Instead, the plot focuses on McGill’s role in Earth’s predicament: a missing Galactic hoard of coins worth a fortune goes missing, and the Taus, as well as the Galactics, are looking toward Earth for its recovery. Involved in this conspiracy are some old friends and enemies.

For readers who expect more of the intense fighting scenes with the legion soldiers dying creative deaths, there’s not as much of this as in previous books. Instead, McGill is more removed from his legion and the fighting and is focused more on singular task. So the story and the legion are more detached from readers, and McGill is more of a distant observer, issuing a few commands and participating occasionally rather than being heavily involved.

Still, the lack of involvement in the major fighting with the legion in the story doesn’t mean that there’s no action. On the contrary, McGill gets involved in many personal battles, and true to form, he dies and is revived many times, and the suspense in the story is maintained through the mystery of the coins and the story of the Turov family, or rather, of the head of the Turov family.

Ice World by B. V. Larson is another exciting tale of the exploits of James McGill. His self-deprecation doesn’t really fool any veteran of the series, and more character development is done for Turov through her family. Action, suspense, and engaging writing make this story about James McGill just as entertaining as previous books.

Read reviews of other books by B. V. Larson below.