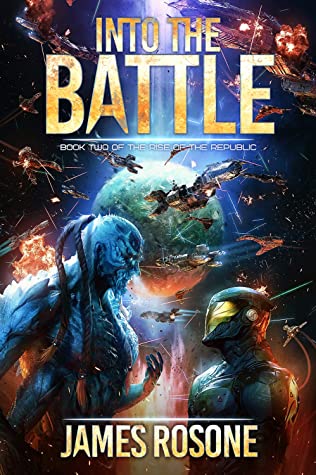 A united Earth fights for New Eden, a mineral-rich planet in a faraway system, as it prepares to defend itself in a fight for survival against the Zodarks, a powerful alien species with an empire that spans the stars.

Into the Battle Review

This second book Into the Battle by James Rosone is a fantastic sequel to the space opera Rise of the Republic. While the titles aren’t necessarily creative, both the title of the book and the title of the series deliver on their namesake.

Unlike the first book in the series, Into the Stars, this second book is packed with action on the planet New Eden, and more excitedly, filled with the space battles that readers have come to expect.

The slow, sometimes plodding pacing of the first book, is replaced by suspenseful and tense battles on the ground and in space. These action-packed scenes catapult the story forward.

While the battles are engaging and exciting, the military strategy sometimes seems a bit lacking. For instance, the admiral orders the Rook to fight Earth’s first battle against the Zodarks alone despite having two escorts available, only to have the two escorts rush into battle in order to provide support.

Instead of going into the battle separately, all of the ships should have engaged the Zodarks together, providing more support. This mistake, and perhaps other dubious calls in the story, seem a bit out of place for a story focused on war.

Whereas the humans are seriously disadvantaged in the first book, they are advancing at a rate that allows them to match, even exceed, the Zodark ships, making for less lopsided battles. Rosone provides some convincing reasons for why the Zodarks haven’t just conquered humans with their superiority.

A characteristic of humanity that is often praised is human ingenuity. Humanity’s penchant for adapting, improvising, and learning isn’t likely unique in the universe. On the contrary, space-faring civilizations likely share certain characteristics because of evolution. But in this book, ingenuity allows humans to quickly adapt technology that places them on almost level playing field, making the cat-and-mouse game of technological edge that much more interesting.

As with the previous books, storylines regarding the pirates or outer belt system seem unimportant despite the book’s attempt to integrate into the main storyline. Questions raised from the first book, like the presence of humans and other aliens, are finally answered toward the conclusion of this book, leaving readers with only more questions and expectations about future stories.

Into the Battle by James Rosone continues the exciting expansion of humans into a dangerous galaxy occupied by a fierce alien species intent on enslaving humans. Humanity’s struggle against the Zodarks reveals some fascinating technologies with implications that point to a very busy galaxy indeed.